On 24 August, ISability will be hosting a fun athletics event that caters for people with disabilities, as well as able-bodied athletes who wish to participate for fun.

The event will take place at Leeupark, Louis Trichardt High School’s athletics field. Registration of athletes takes place from 07:30, and the events begin at 09:00, with the programme running until 14:30. Roughly 150 athletes from various special schools in the Vhembe District have already registered to participate, but individual late entries are welcome on the morning.

Rising star and celebrity on the Para-athletics as well as the able-bodied athletics scene, Ntando Mahlangu, will be at the event to motivate and encourage others. Ntando was born with a disability that prevented him from walking for the first 10 years of his life.  In 2012, he underwent a double amputation operation and, courtesy of Jumping Kids and Johan Snyders, he received his first prosthetic limbs. In 2015, still only a 14-year-old teenager, he won silver at the Paralympics in Rio in the men’s 200-metre sprint.  In the same year, he won four golds and broke two junior world records. Ntando will run a demonstration race at 13:30, where volunteers from the crowd will be able to race against him.

Members of the community who have any form of disability and would like to learn how they can become involved in a sport or recreational activity are invited to join the ISability team and learn more on the day.  All members of the community are invited to come along and be inspired, and to inspire the participants by cheering them along.  Local dance-star, Anwyll Buys will be giving some dance demos during the morning, and refreshments will be on sale. “Forget boring Saturday mornings stuck in a room or traffic or in front of a TV – come and have some real fun!” said the club. 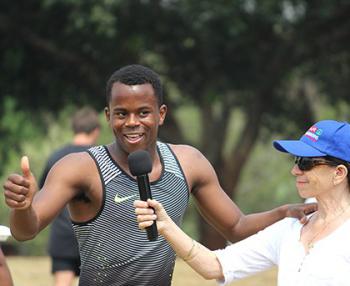