Chilies too hot for High Aims

Tswera Hot Chillies were too hot for Matangari High Aims when they beat them 5-2 to secure a place in the quarter-final stage of the King Abraham Pre-Season KO competition at the Sambandou grounds on Saturday.

Chillies deserved to win from the start as they were all over High Aims in all departments, initiating some dangerous passes from behind.

Chillies could have sealed the game within the opening 15 minutes. Their lethal striker, Calvin Mmbengeni, squandered two clear chances in quick succession. He received a beautiful pass from Mpheletshedzeni Singo in the 11th minute and forced his way through the defence of High Aims before unleashing a half volley from the 20-meter area. Unfortunately for Mmbengeni, the ball did not have enough power behind it. Phumudzo Ragalavhanda, the Aims’ keeper, easily palmed the ball away for a corner kick.

Mmbengeni committed a similar blunder a few minutes later. He shot wide from inside the box after intercepting a back pass.

Hot Chillies took the lead in the 24th minute. Ipfi Khorommbi tried his luck from inside the box with a half volley. The shot was too hot for the Aims’ keeper, who palmed the ball back into the net in an attempt to clear.

High Aims played attacking football towards the end of the first half. They found the equalizer in the 44th minute. Loshani Nedambale beat the keeper with a header, following a scramble within the box.

The score remained unchanged until the referee blew the final whistle. The winner was determined through penalty shootout. Hot Chillies converted four of their five chances, while High Aims scored only one. 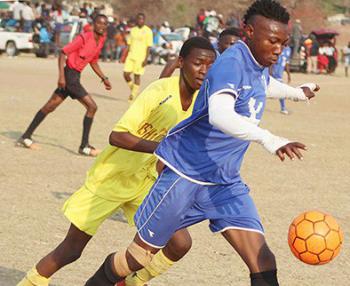