Singer Ndivhudzannyi 'Makhadzi' Ralivhona (17) has created a persona for herself, which has also earned her a cult status within the short space of just 18 months - something which is the envy of many musicians and singers.

Makhadzi’s fourth album is aptly titled Muhwalo uya nndemela (Vol 4). On this latest offering, she tackles issues of womanhood and the problems which every woman faces in this world.

On the title track, a disgruntled woman tells an estranged husband that the baggage he has left behind is too heavy on her. “Why do you give me your baggage and deny me love?” sings Makhadzi. She explains that only selfish men could do that. “But my aim of singing this song is to remind estranged husbands and dads that their wives and children need them most.”

Ni Rhandzile loyu na loyu highlights a very serious situation where a woman finds herself in a dilemma, because she is in love with two different men. She is not sure which one to choose one in her life.

In Mutshutshisi, the singer reprimands a man who gets married when he still has his heart and eye on all the skirts in the streets. “Any man or woman who gets married must first understand that marriage or a serious relationship needs commitment,” she says. “Or else the matter will end up in court where the prosecutor is likely to tell the man to pick up his jacket and leave the house which he shares with his wife and children.”

Makhadzi composed and produced all the songs on her album. She is still young but her lyrics are inspirational in that they encourage listeners to have good relations with all people.

Some time last year, when she was still trying very hard to get her voice heard, she received a meritorious mention by the Makhado Municipality’s mayor, Cllr David Mutavhatsindi, during an imbizo at Mudulini village. “That young girl Makhadzi is among the artists whom the municipality must support by inviting her to sing during our events for pay,” said Mutavhatsindi.

A resident of Mashamba-Tshivhangani, Makhadzi passed her Grade 11 at Integrated High School in Mukula last year. She is currently in Grade 12. She composed and produced all the songs on her album. 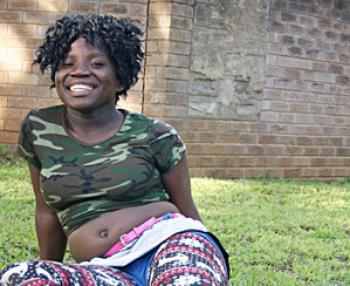 Makhadzi represents the youth who prove that dabbling in education and talent at one and the same time is possible.