The 28-year-old praise singer, Vendaboy Poet, who recently made headlines in national and community newspapers when he praised President Cyril Ramaphosa aboard a British Airways flight, has just released his début poetry album.

The album, Ndi Nnyi, comprises 13 poems. “I've been composing, writing and reciting original poems to a wide range of audiences who always said they were thirsty for my poetry compilation,” he said. “Today, here I am releasing this poetry album, so that they can have a CD, which they will own and listen to the poems in their own time.”

“Featuring other artists only shows that you value art as an artist and that you believe in sharing, harmony and unity.”

He thanked his pastor, Mr NA Mudau (Apostle Muladzashango), for helping him to realise his dream of having a studio-recorded album of his poems. “Pastor Mudau prophesied that I would praise the President, and when the time came for me to praise the President, I felt so awed by the fulfilment of the prophecy. I also thank Pastor Vhutshilo Mabuda, who recruited me to join Pastor Mudau's True Worshippers Christian Centre.”

Vendaboy, who was born Lutendo Mugagadeli, said that the release of his poetry album was only the beginning of more new and good tidings that were to follow his talent. “Just watch this space – and you'll soon join in and celebrate the beauty of South Africa with me,” he said. 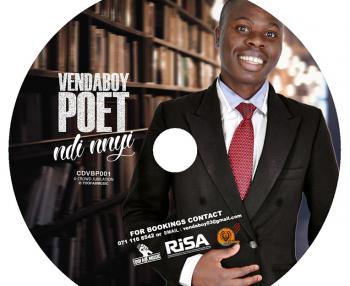