As a young girl growing up on the dusty streets of Mashamba outside Louis Trichardt, Ndivhudzannyi Ralivhona did not know she was destined for great things.

The 21-year-old queen of wedding songs, better known as Makhadzi and whom many have likened to Brenda Fassie, made a clean sweep on Saturday during the Tshivenda Music Awards (TSHIMAs).

The TSHIMAs, which have become the annual premiere event on the Tshivenda music calendar and are the brainchild of young businessman Augustine Nethononda, are now in their fifth year.

The event – aimed at growing artists and Tshivenda music - was held at the Thohoyandou Town Hall and was attended by the who's who in music circles, as well as a lot of officials.

The artists competed in 15 categories on a night of celebration and fashion as local celebrities, artists and politicians lit up the red carpet and gave performances on the stage that had the audience on their feet.

During the event, veteran Tshivenda musician Alpheus Ramavhea, the first artist from the Vhembe area to record a full album, received a Life Achievement Award, as did the gospel group ECHO.

Speaking during the awards, Thulamela Mayor Avhashoni Tshifhango, whose municipality also sponsored one of the categories, said his municipality had taken a decision to support and empower local artists and had done so at the recent Thulamela Annual Show, where only local artists performed.

He called on artists to continue producing good quality music that would help develop the Tshivenda language.

Big time winner Makhadzi, who wowed fans in France last year, said she was humbled by the support she was getting. She said the awards had cemented her career and were an indication that she was doing well.

In the closing session, Makhadzi received thunderous applause when she took to the stage to perform her hit song, Tshanda Iya.

TSHIMA founder Augustine Nethononda thanked all the stakeholders and more specifically the sponsors for making the event what it is.

The winners of this year's awards are:

• Best Tshivenda Reggae Artist/Album of the Year: Elekanyani Tshabuse aka The Zion Soldier;

• Tshivenda Song of the Year: Makhadzi; 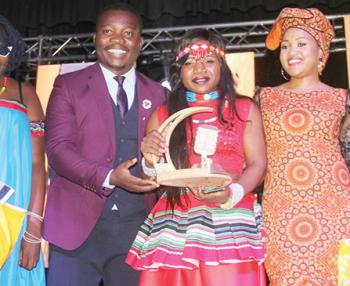 Thulamela Mayor Avhashoni Tshifhango (second from left ) hands over a lifetime achievement award to veteran musician Alpheus Ramavhea (third from left) and his family during the ceremony.