More than 150 young children from seven rural villages in Ward 7 of the Mutale Local Municipality were urged to be vigilant against human trafficking during a workshop aimed at providing them with tips to survive the scourge.

Young children from Ngalavhani, Mufulwi, Mafukani, Helula and other nearby villages attended the  Anti-Trafficking Campaign Workshop, organised by the Seven Villages Rural Development Forum, which was held at the Matavhela Secondary School’s sports grounds on Saturday.

“We are worried about how the lack of service delivery is affecting our rural communities, as well as crime. We are a rural development forum aiming to empower young people with skills, develop our rural areas, look into job creation and fight the infection of HIV/Aids in our communities,” said Mr Thivhulawi Mbevhana, the secretary of the forum.

Mbevhana said the forum was also worried about the disappearance of the four-year-old Isaac Ramugondo of Tshamulungwi village. He was reported lost in 2010 and has not yet been found.

Mr Thivhulawi Tovhakale, a  probation officer in the Mutale Department of Social Development, said children couldbe taken to be used as sex slaves, used for drug dealing or  possibly be killed. He crictised young children who travel some distances at night without the company of elder people as this is very dangerous. “We condemn the fact that children are sent to fetch wood from the forests and water from the rivers without the company of adults,” added Tovhakale. 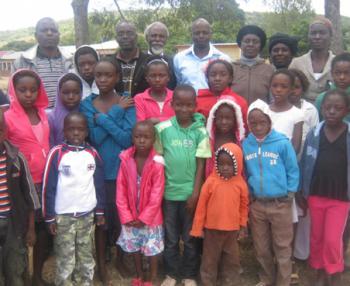 Young children pose with members of the Seven Villages Rural Development Forum after the anti-trafficking workshop.