Residents in the quiet village of Dopeni were awakened by hysterical voices of people shouting that the two buses at the mini bus depot were on fire early last Friday morning.

The bus that was burning was a double trailer of Great North Transport (GNT). According to the residents, the two buses were parked close to each other when the fire started on the double trailer. A young boy from one of the neighbouring houses said he heard a booming sound as he was sleeping.

He wanted to go out out to investigate and thought that he had even heard footsteps. His mother, however, quickly warned him not to venture out, since it might be dangerous to do so.

The two bus drivers, a male and a female, were sleeping in the two rooms at the depot. The buses were parked right near the house. By the time the drivers came out, a large part of the first bus had already caught fire. The male driver fumbled for the keys and slipped into the second bus. After a struggle, he managed to start the engine and drove the bus out of the gate, away from the burning one.

The other bus burnt out completely and only a skeletal structure remained.

The spokesperson for the Siloam police, W/O Edzisani Tharaga, confirmed the incident and said that investigations by the police were underway. “No arrests have been made at this stage,” Tharaga said.

The incident occurred at a time when the national bus strike is reaching its peak. While Satawu-affiliated bus drivers are on strike and most bus companies are hardly ferrying commuters to and from their destinations, GNT has noticeably been on the road. 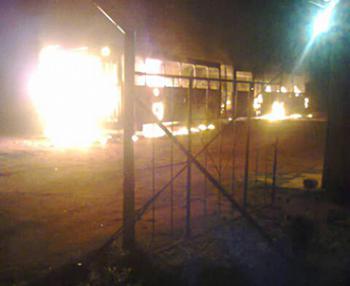 The bus that survived the burning.

The GNT bus burned in the early hours of morning on Friday.