Granny celebrates being one of the oldest citizens

While South Africans were recently celebrating  Women’s Day, one of the oldest citizens, Ms Vhulahani Johanna Tsanwani  of  Musunda village in Mutale, was celebrating her 110th birthday. She was born on 9 August 1903 at Gundani village outside Thohoyandou.

As a way of honouring her,  her seven children and 31 grandchildren had organised a birthday party for her and her fifth-born son, Simon, who has just turned 60. Her younger sister,  Anna (100), also attended.

The big birthday party was held at one of the Nwanedi farms. The event was attended by close family members only, including her three great-great-grandchildren.

Speaking on-behalf of the children, Simon said they wanted to pay special tribute to her as a good mother. He added that his mother was still healthy, with good vision and only using a walking stick. He attributed  her good health and long life to a healthy lifestyle.

“Our mother hardly gets ill. She does not eat fats and genetically modified food. Her staple food is green vegetables," said Tsanwani. 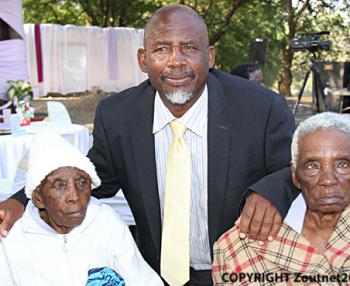 Ms Vhulahani Tsanwani is photographed with her son, Simon, and her younger sister, Anna.