The Department of Rural Development and Land Reform has handed over the title deed of Vleifontein 310 LS Farm and Slag Farm to the Mavungeni Communal Property Association.

Speaking during the hand-over ceremony held at Slag Farm on Saturday, the Limpopo land commissioner, Mr Tele Maphoto, said the CPA should work with Chief Nthabalala to ensure development in the area.

Maphoto said members of the CPA should refrain from using the title deed for personal gain. He said the CPA should accelerate development on the claimed land and ensure that all community members were benefiting. “Chief Nthabalala should know about every development happening here; we should not come back to settle disputes."

He added that the department was resolving the fracas of land invasion by utilising the court system and the illegal occupants would be evicted peacefully.

The CPA claimed the land in 2001 and successfully acquired it in 2002. Since then, they have been working on the land without the necessary title deed. During the settlement in 2002, the CPA was only given a registration certificate by the land commissioner. The absence of a title deed resulted in the challenge of land invasions.

A large number of people occupied the land illegally after a former member of the CPA, who knew that there was no title deed, allegedly sold stands to people. The CPA tried to remove those people, but did not succeed. The Department of Rural Development and Land Reform then intervened.

Late last year, the matter of land invasion was addressed by the North Gauteng High Court. Following that ruling, the CPA was adamant that they would successfully remove all illegal occupants from the farm. The land invasion has also impacted negatively on the running of the farm. “We were no longer working according to the business plan, since most parts of the farm had been invaded,” said David Baloyi, the general secretary of the CPA.

The CPA uses the restitution farm (Vleifontein 310 LS) for projects such as macadamia farming, vegetable farming, poultry, and bee farming. “We have registered co-operatives and hire people to work at the farm. Those people are paid monthly,” he said.

The chairperson of the CPA, Mr Michael Baloyi, said the CPA was operating in a professional manner. The body has audited financial statements and regularly files tax returns with SARS. He said, however, that the government should deliver on its promises. “We have lots of challenges here and the government has promised to address most of them, but nothing has happened,” he said.

The MEC for Safety and Security, Ms Joyce Mashamba, said the CPA and the chief should develop creative ideas and ensure that members of the community were benefiting. 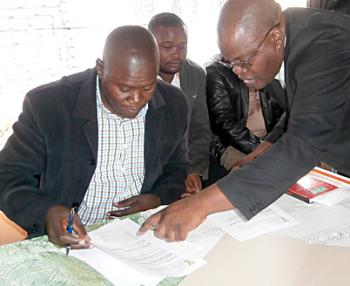 The chairperson of the CPA, Mr Michael Baloyi (left), signs the title deed while the provincial land claims commissioner, Mr Tele Maphoto (right), shows him where to sign.

Handing over the title deed are, from left to right, Ms Grace Mashamba (MEC for Safety and Security), Mr Michael Baloyi (CPA Chairperson), Vho-Thovhele Vhutshilo Nthabalala and a member of the Nthabalala Royal Council.