The businessman, Mr Beyane Nabeforc (38), was sitting under a tree with his landlady, Ms Joyce Khosa, when he rose to go to his room at around 19:00 on 11 June. He returned with a grass broom and a dirt scoop. Soon three men approached, and one of them was wielding a gun. They all were wearing balaclavas.

“One man said, when he saw Nabeforc, 'This is the man we are looking for!', and Nabeforc threw down his broom and dirt scoop at once,” said Khosa.

Nabeforc ran to Khosa and folded his arms around her waist from behind her back, trying to hide behind her. However, the criminals hit both Khosa and Nabeforc with a wooden object and they fell down. He managed to rise up and tried to run away, but they made sure he was down on the ground again.

“I saw one of the men put his gun's barrel on Nabeforc's stomach and fire a shot,” she said. Somehow she managed to run away, finding her way to the house.

Khosa explained that the first person to arrive on the scene was Nabeforc's fellow businessman. The criminals had left the victim lying down, blood oozing from his wound to the stomach. “He spoke with Nabeforc in their language and the man got very angry after listening to what he had to tell him about the shooting and attack,” she said.

It appeared that Nabeforc had told his countryman about one of the suspects, who allegedly used to come and take goods from his shop without paying. The suspects had also ransacked Nabeforc's room. It was not clear what they stole from the room since Nabeforc stayed alone.

The following day, the residents assisted the Ethiopians in searching for the suspect, who was known as The Great Makhubele (30). He was found at a local tavern and the mob attacked him.

The ghastly killing of the suspected criminal was captured in a video clip that has spread through the province. It starts with his painful, heartbreaking cry: “Ohoo!” The voices of angry men speaking in a foreign language can be heard, as stones, a steel wheelbarrow, a crow bar, a beer crate, bottles and chairs land on the suspect's body.

“Iyooh! Yuuuuoo! Yuuii!” cries the victim of mob justice. “Ni twa ku vava (I am in much pain).”

When a brick smashes the alleged suspect's head and blood spurts out, a woman covers her face with her blouse and walks away.

It is suspected that the Ethiopian businesspeople who allegedly killed Makhubele had travelled from surrounding villages and Mpumalanga. It is alleged that there were around 100 Ethiopians involved in the mob murder.

The provincial spokesperson for the police, Capt Mamphaswa Seabi, confirmed the two incidents of murder and said the police had opened two cases of murder.

“We have not arrested any suspects so far,” he said. “Nabeforc was shot twice. Makhubele was allegedly killed by a mob which consisted of businesspeople.”

(Parts of the very graphic video will be available on www.limpopomirror.co.za. It is, however, not recommended for sensitive readers.) 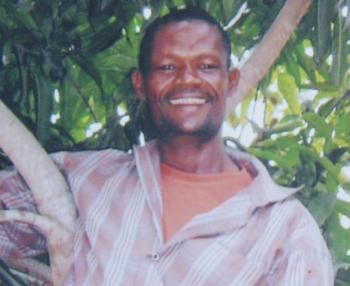 Ms Joyce Khosa witnessed the killing. She is seen here on the spot where Nabeforc was shot dead.

Ms Joyce Khosa says Nabeforc's room was ransacked while she ran for cover.