Almost without anyone noticing in the Soutpansberg district, a new book was published which gives unique and detailed insights into the history of the region in the years 1850 to 1913. The book, published by an American professor, focuses on land surveying and how this arduous task was carried out amid wars, political struggles and diseases. All this happened in often the most remote and inaccessible landscapes.

The author, Lindsay Frederick Braun, presents two distinct episodes of struggle over lands and livelihood in the book. In the first few chapters he focuses on the Eastern Cape, but then the attention moves to the northern parts of the then Transvaal. He discusses the “land of the Ramabulana” and looks at the rise and the fall of Paramount Chief Mphephu.

Some of the “main characters” in the book are the land surveyors and geographers. Names such as Devenish, Rühs, Jeppe and Rissik pop up every now and then and the role they played in not only land surveying, but also as negotiators and peace makers, is discussed. They had to literally venture where no surveyors had ventured before and set the boundaries for what was later to become ferocious struggles for land.

The book is clearly well researched and the author has gone to great lengths to differentiate between facts and folk tales. The references include anything from authors such as Dorothea Möller-Malan to academics the likes of Maanda Mulaudzi and Dr M H Nemudzivhadi.

Lindsay Frederick Braun is an associate professor at the University of Oregon. He spent several years of his life researching, among others, the history of colonial southern Africa. “To me, Africa is too often neglected as a central locale in recent global history, and both my research and teaching seek to bring forth elements of the unwritten side of African interaction with the world,” he writes on the university’s web page. His current work primarily concerns colonial-era struggles over notions of territory, state control, and accommodation.

Residents of towns such as Louis Trichardt and Musina will recognise many of the names mentioned in the book. “I centre my work on the Soutpansberg largely upon the standoff between the western Venda house of Ramabulana and various other parties from the south that sought to define their extent.  That's where Carel Abraham Rühs, A. L. Devenish, F. H. (Henk) Rissik, and a number of others come in, as well as various chiefs (including Albasini), lineage heads, field-cornets, commissioners, inspectors, and others who had some kind of role in shaping the larger landscape,” says Braun in an email response to questions.

According to him it was not always easy to find information on these often controversial characters. “To read columns in the extant numbers of the Zoutpansberg Review from  before 1898, for example, you'd think Devenish was some kind of mobster for his firm hold on survey work in the far north and his active role in mineral speculation - but his relationship with the Venda mahosi under Makhado and then Mphephu is very interesting and more nuanced, insofar as we have information,” he writes.

“The region is remarkable for its peculiar past, which is what attracted me to it.  There are still a number of questions we don't have answers to, and a lot of documents that seem to have disappeared. For example, we still don't know who the BSAC agent 'Captain Keith' (T.V. Bulpin calls him 'Buckskins') really was, what the full story behind Bulala Taylor's reign of terror in the region was, or where the official correspondence from Munnik or the Naturellen Commissaris in Spelonken (JJH Wolmarans) after 1896/97 went.”

Braun’s book also reflects on many other people politically and includes the encounter with Tregardt (and his role in Ramabulana's takeover) as well as the episode of Schoemansdal, where a lot of notional boundaries and farm claims were first laid down in the 1860s and then resumed after 1898.

It seems very likely that this will not be the last work of Lindsay Frederick Braun and he may unravel some more interesting facts about the Soutpansberg in his research, albeit from a country very far away.

The book, titled Colonial Survey and Native Landscapes in Rural South Africa, 1850-1913, is available via South African online stores such as Takealot.com but comes at quite a steep price of R1 990. This is mostly because of the limited market for such academic works, the high cost of printing and a very unfavourable exchange rate. “We’re looking for a South African partner press to offer a lower-cost edition, but nothing has materialized as yet,” said Braun. 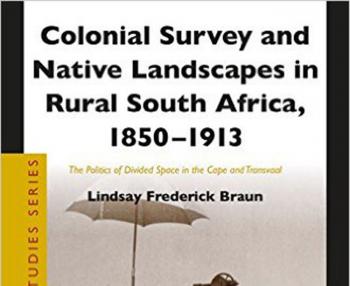