Mopane trees: The management of a national treasure

The mupane tree (Mupani in Tshivenda) is one of the economically, socially and ecologically important tree species to villagers all over southern Africa where it occurs. The mupane is found in Zimbabwe, Botswana, Mozambique, Namibia, Angola, Zambia, Malawi and the Mpumalanga and Limpopo Provinces in South Africa.

The mupane is utilized for firewood, medicine and the construction of traditional structures. It is preferred to other species for cooking and heating because it produces a high-quality fire and emits less smoke. Research done by the author shows that between 2.5 and 2.9 tons of firewood are consumed by a family of six people per year. It is well known that most mupane parts (leaves, bark and roots) are used for healing of various diseases. The leaves and bark are used to relieve pain, diarrhoea, coughs and cancer, while the roots are used for healing kidney stones, bilharzia, and diarrhoea and to stop vomiting.

Also, the poles of the mupane are used to construct traditional huts, granaries, fencing, handcraft items and animal kraals. Research has also shown that the hard wood of the mupane and its ability to resist woodborers result in its being highly used for construction, and few species match this. A structure constructed from mupane can last between 5 and 25 years.

Perhaps more important to villagers are the mopane worms, Mashonzha, which are hosted by the mupane tree. Men, women and children harvest the mopane worms for household use and to supplement their incomes. The high nutritional content of mopane worms also makes them highly sought after, particularly between December-January and April-May. The selling of mopane worms generates lots of money for the villagers, which shows its socio-economic contribution to the community. Mopane worms are being sold at local markets, particularly in Giyani, Malamulele, Thohoyandou and Sibasa Shopping Complexes.

Despite its enormous value to the villagers, the mupane trees are facing serious management problems due to the combination of a number of factors. Amongst others, these include over-utilisation, primarily influenced by human population pressure, on natural resources, together with poverty, frequent fires and mismanagement of resources as a result of lack of knowledge. Lack of responsibility and weakening of traditional authority in the management of woodlands have also increased over-use of this valuable tree species. The consequence for this includes a reduction in the value derived from woodlands, and an increase in the distance and time to collect firewood. Furthermore, the development of respiratory problems, especially in women and girls, due to smoke exposure from firewood use as they start using less preferred species for firewood, is on the increase. There is also less participation of woman in community development activities, due to the indiscriminate use of veld products.

Perhaps what is needed to rescue this valuable tree from extinction is the following:

Conservation agencies within the Department of Environmental Affairs and Tourism need to educate the villagers about the value of and the threats to mupane trees and mupane worms.

Sourcing of funds to promote sustainable practices on mupane woodland.

Giving management responsibilities to the villagers but with support from relevant conservation departments.

Demonstrations on practical methods on the efficient use of firewood.

Capacity building (training of existing staff in the field of biodiversity management).

Amendment of woodland resources harvesting regulations/act/policy to promote sustainable use. Acknowledgements: Thanks to the DEAT, DST/CSIR and NRF for funding of this research. 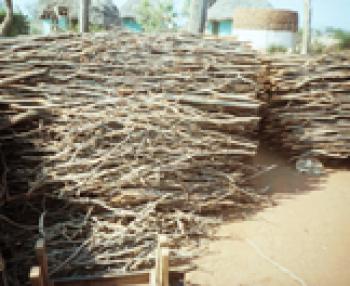