At least five protestors were injured in clashes with the police during the violent protest action that saw the biggest part of Sinthumule being closed off on Friday morning. Community members are upset about the escalation in crime in the area and have embarked on a total shut-down of the area to get the government to listen to their grievances.

Protestors from Madombidzha and surrounding villages in the Sinthumule district started barricading roads leading out of the area early on Friday morning. The protestors were blocking off roads using stones and all sorts of rubble. Some of these obstacles were set alight in an effort to prevent motorists from getting past.

Thousands of commuters were left stranded and many workers did not report for work, because of the barricaded roads. Shops in the area were closed for most of the morning and the roads around Sinthumule, Makhado Air Force Base and Kutama were blocked. Angry members of the community even broke down a bus stop shelter and placed it in the road.

The situation at Madombidzha, the centre of the violent protest, remained tense. Earlier in the morning the police had to use teargas and rubber bullets to disperse residents. Several protestors were injured during some of these clashes. Some had to be taken to the Louis Trichardt Memorial Hospital for treatment.

The unrest follows the ongoing problem of house-breaking and theft in the Sinthumule and Kutama area. The residents seemingly decided to take the law into their own hands. The rampage prevented some pupils from going to school, because there was no transport. Some of them were forced to walk many kilometres to and from school. A large number of schools in the area opted to rather close and sent the children back home.

Until the issue had been resolved, people from outside areas are warned to avoid the roads leading to Sinthumule and Kutama. 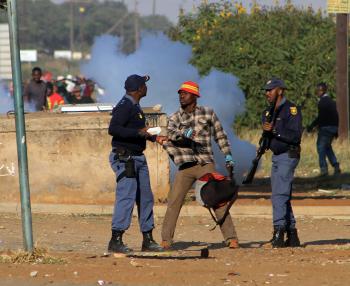 Police clashing with protestors in the Madombidzha area.

The police kept a close eye on happenings in the Madombidzha area.

Police in discussion with some of the eaders of the protest.