“The fact that there were nearly 400 suspects arrested and charged for drug trafficking in Musina clearly indicates that we have a serious problem of drug abuse in our community. It is not a secret that drugs like nyaope, cocaine, dagga, crack, heroin and mandrax are openly sold to our community members, more worse - even on school yards.”

These were the words of Mayor Mihloti Muhlope when addressing hundreds of community members who took part in the march against drug abuse organized by Musina Municipality on Monday.

Muhlope said she feels very emotional when she talks about issues relating to alcohol and drug abuse. “I know of many promising youths whose lives were destroyed because of drugs. The physical damage and mental disorders caused by drug and alcohol abuse are irreversible. What type of future generation are we creating if we don’t stand up and say no to drugs? My humble request is that we work closely with all community structures and the police to eliminate this demon of alcohol and drug abuse in our municipality.”

She said that the drug lords are found within the communities “and it is our responsibility to expose them. We live with them in our families and some of them are our friends and relatives. Why do we then choose to keep quiet while they continue to destroy our community?  Let us all be aggressive by not allowing our municipality to become a paradise of drug lords.”

She commended the local police, community stakeholders and the public who are taking the fight against drug abuse very seriously. “We need more ambassadors who will stand up and say no to drug abuse. The law enforcement agencies should also hand down harsh sentences to drug lords so that they can serve as examples that dealing with drugs does not pay.”

She acknowledged the “extra ordinary” work by a group of volunteers, Citizens against crime. “Without getting a single cent, these men and women patrol the streets of Musina every night to make sure that we are all safe and drugs are not smuggled into our town.” 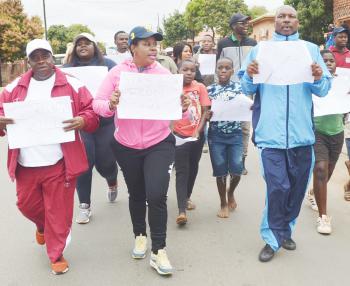