Representatives of the Limpopo Provincial Legislature, traditional leadership and members of the public met for a public hearing and contribution of comments on the Traditional and Khoi-San Leadership Bill at the Makhado show grounds on Friday.

Different representatives and members of the public from the Vhembe District participated in the hearing, raising different views and adding comments to the proposed Bill whose introduction in Parliament was approved in August 2015.

It was heard that the main objectives of the Bill included to “consolidate (and consequentially repeal) the National House of Traditional Leaders Act, 2009, and the Traditional Leadership and Governance Framework Act, 2003, [in order] to ensure an integrated and uniform approach in dealing with all matters relating to traditional leadership”.

The provincial chairperson of the Portfolio Committee on the Traditional and Khoi-San Leadership Bill, Ms Mokgadi Aphiri, stated that Section 211 of the Constitution of the Republic of South Africa, 1996, makes provision for the recognition of the institution, status and role of traditional leadership according to customary law. “It is further determined that a traditional authority that observes a system of customary law may function subject to any applicable legislation and customs,” she said.

During the hearing, local participants requested the committee to revisit the operation of the ward councillors in relation to traditional leaders within communities since the work of the two parties is the same.

The deputy secretary of the Congress of Traditional Leaders of South Africa (Contralesa) in Vhembe, Mr Prince Ramovha, said the public hearing on the Bill was overdue in that the Khoi-San's leadership should have been recognised a long time ago in the Western Cape. “We look forward to a stage where this Bill will finally be passed,” he said. "We also need government to scrap off the titles 'headmen' and substitute them with 'junior traditional leaders' and the 'chief' into 'senior traditional leader' because those former titles are just an apartheid title legacy." 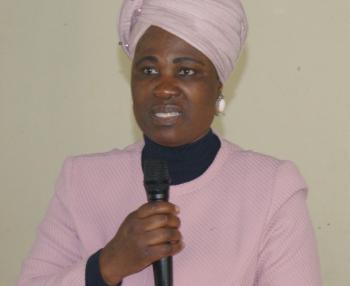 The provincial chairperson of the Portfolio Committee on Traditional and Khoi-San Leadership Bill, Ms Mokgadi Aphiri, addresses the meeting.

Some of the people who attended the public hearing on the Traditional and Khoi-San Leadership Bill are (from left to right) Mr Gilbert Muofhe (Kutama Traditional Authority), Ms Cecilia Phaswana, Ms Livhuwani Ramalamula, Ms Rosinah Matsa, and Mr Godfrey Madongo.