When the documentary Blood Lions was released in 2015, people were shocked that the filming of the bred-in-captivity, emaciated lions had taken place on a local farm in Alldays.

What is happening to South African lions now has further shocked the world. The National Council of Societies for the Prevention of Cruelty to Animals (NSPCA) recently applied for an urgent interdict in response to the South African government’s illegal setting of annual quotas for the legal export of lion bones – 1 500 lion skeletons to be exact - for the year of 2018 alone.

The Zoutpansberger spoke to Karen Trendler, who is the manager of wildlife trade and trafficking with the NSPCA. “We asked for a review of last year’s quota of 800 skeletons, and while that process was still waiting for an outcome, a statement was issued on 16 July this year when the Minister of Environmental Affairs announced that the lion-bone export quota for 2018, as from 7 June, was set at 1 500 skeletons, with or without skulls. The reasons for skeletons to be listed as with or without skulls is because when lions are hunted for trophies, the heads are usually the trophies, with the rest of the animal being of no use to the hunters. Legally, before issuing such a quota, the department must leave the application open to the public for perusal for a period of 30 days, which did not happen,” said Trendler.

The export of lion bones was not a new practice, said Trendler, but the quantities now in play were sky-high and not in any way sustainable. Breeding lions for their bones as a business enterprise started gaining momentum in 2008, purely because of the continued extinction of tiger species (three species of tiger are now completely extinct). In Asia, tiger bones have been used historically in traditional medicines. With China banning the trade in tiger bones, lion bones became the new ingredient for these potions.

The bones of wild lions are preferred in the making of these concoctions. While CITES is apparently in control of whether or not wild lion bones are being exported legally within the quota system, a loophole exists in that, once all the required tests have been done on skeletons, they are returned to their exporters for packaging. Spot checks could reveal that wild-lion bones have replaced those of lions bred in captivity, but the checks are carried out too randomly to make any difference.

Trendler said that the same people who were buying legal lion bones were buying poached rhino horn, pangolin, and other illegal animals or their parts. They do not care where these come from, and the demand for these things is not decreasing, because of their scarcity. The prices just keep going up, making the trade more appealing to many. She said that lions bred primarily for their bones meant that their care, feeding, and upkeep until their bones were adult-sized and ready for harvesting were of no interest to potential purchasers. The bones of an emaciated, miserable lion that has never been out of a backyard-sized enclosure before being slaughtered are worth no less than a well-fed, free-roaming, king-of-the-jungle type cat.

“There are no regulations for the farming and the slaughter of lions,” said Trendler. She added that appalling cruelty was taking place, with no laws in place to protect lions bred to be slaughtered for their bones. “With cattle or other farming, there are at least laws and regulations, and SPCA officials have something to work with when they enter facilities that breed animals for slaughter or for other reasons. Lions have no protection in this way, and South African-bred tigers are even worse off because they are a non-indigenous species.”

Right now, in South Africa, 3 000 wild lions and approximately 8 000 lions kept in captivity can be found. The Conference of the Parties to CITES 2017 (CoP17) did not raise protection for lions to Appendix 1, which is the level of maximum protection generally awarded to endangered species, and that was requested by nine African countries, which excluded South Africa. South Africa, instead, was issued with the legal rights to export fixed quotas of lion bones. The reasoning behind this move was that it would “end the illegal lion-bone trade”.

Trendler told the Zoutpansberger that this industry was currently very much under the radar. No official numbers were obtainable regarding the number of registered lion breeders, although the fact that the number of breeders stands at 200 is known. Slaughterhouses that have been seen by the NSPCA thus far are only those that have been reported by members of the public because of extreme cases of cruelty in the care, handling and slaughter of certain lions. 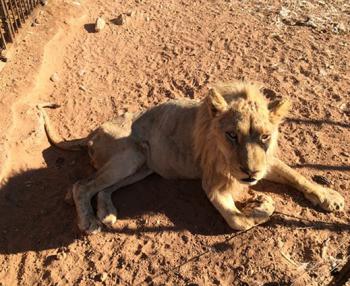 Karen Trendler, the manager of wildlife trade and trafficking with the National Council of Societies for the Prevention of Cruelty to Animals (NSPCA), says that no regulations currently exist in South Africa to ensure the humane breeding and slaughter of lions and tigers. Photo supplied.

Evidence of neglect in lions bred in captivity for use either in canned hunting or the Asian lion-bone trade. Photo supplied.