Student encourages others there is life after HIV

The 26-year-old Ms Tebogo Nkoana is not only disabled, but she is also carrying the dreaded Aids virus in her body.

The partially blind woman from Krugersdorp on the West Rand discovered that she was HIV positive in 2017 after undergoing some tests.

Despite the odds, the third-year media studies student at the University of Limpopo is determined to make it in life. Her ambition to make it in life is fast making her a household name in the area and a beacon of hope in the community, as well as among her peers.

Recently, she visited the Vhembe TVET College at Makwarela, where she gave a motivational talk to students. This was during a function organised by the Department of Higher Education and HEAIDS at the official opening of the campus clinic.

Addressing her peers and other guests, Nkoana narrated a harrowing tale of how she was infected by the Aids virus. "It was sometime in 2015 while I was attending a family gathering at my grandmother's house at Burgersfort here in Limpopo, when I fell victim to rape. I was helpless when even family members could not help me in that predicament. I was very confused and stressed," she said.

Nkoana said she thought she would forget the incident over time, but the worst was still to come. "In 2017, I got tested and was diagnosed with the HI virus. This was the worst time of my life. I felt like my life had slipped away and that I was going to die. I thought of taking my own life but decided against it.”

She added that she then heard of a support group on campus and, after careful thought, decided to join the group, who gave her a lot of encouragement.

She further indicated that, after a series of engagements, she finally found out there was more than life after HIV and her life changed for the better. "Here I am today, on the verge of completing my degree, and things would not have been like this if I had focussed on the negatives rather than the positives. I am here as an example that there is life after HIV. Being HIV positive is not the end of the world.”

Many commended Nkoana for being bold and standing up to the challenge of living with HIV. 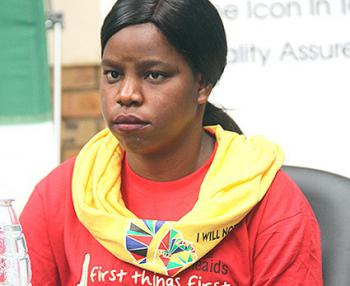