New “buyer” for VBS, but where's the money?

A company claiming to represent the minority shareholders of VBS Mutual Bank has made an offer to purchase the bank and save it from being liquidated. What is uncertain, however, is whether the company tasked to do the buying has the necessary capital for such a transaction or any legitimate backers.

Last week, the VBS Stakeholders Forum sent out a press release, stating that the forum, together with its financial backers, had made an offer of R2 billion to purchase VBS Mutual Bank. “The offer has been delivered to the provisional liquidator, Mr Anoosh Rooplal, the Reserve Bank governor, Mr Lesetja Kganyago and the Registrar of Banks/CEO Prudential Authority, Mr Kuben Naidoo on 25 July 2019,” said the forum’s spokesperson, Mr M Muvhulawa.

The forum further threatens that, should the Reserve Bank and the provisional liquidator not respond within 14 days, an urgent court application will be launched for a review of the liquidation and curatorship process.

Earlier this year, the forum announced that it had mandated Africapacity Investment Group to “rescue, commercialize and recapitalize” VBS Mutual Bank. A task team was compiled to investigate and evaluate all facts surrounding the VBS saga. Africapacity came to the conclusion that National Treasury was the main contributor of VBS’s liquidity crisis, by instructing municipalities to withdraw their investment. It also accused the Reserve Bank of blocking investment funds to the tune of $75 million (roughly R1,05 billion) that was allegedly paid into Africapacity’s account by overseas investors.

Africapacity’s chief executive officer, Mr AM Moagi, refers in a letter addressed to the provisional liquidator to a meeting that took place on 12 July 2019. During this meeting, the provisional liquidator was notified that Africapacity’s “International Investment Committee had approved the recovery of VBS Mutual Bank by way of rescuing it from liquidation and capitalizing the New VBS Commercial Bank.”

From what could be deduced, the group was told that any purchase offer must be approved by the SA Reserve Bank. A letter was subsequently sent to the Reserve Bank and the provisional liquidator, offering to purchase the mutual bank, including its debt book, the assets and the loan book. A “guaranteed amount” of R2 billion was made available for this purpose. “The new commercial bank shall be capitalised with an approved guaranteed amount of R3 billion, which amount shall be the investment loan of the commercial bank,” said Moagi in the letter.

Moagi said that Africapacity’s “International Investment Committee” had approved a loan enhancement capital amount of $575 million in support of the final agreed offer. The parties were given 14 days to accept and sign the purchase offer.

Not so fast, says SARB

When the provisional liquidator, Mr Anoosh Rooplal, was approached for comment, he warned against jumping to quick conclusions. “We have always and will continue to engage with parties that have made unsolicited offers to purchase various assets of the Bank. We have not entered into any advanced stages of negotiation with any parties at this point. It would appear that some parties are misunderstanding or misrepresenting what has to date been discussed and generally most of these discussions have been introductory in nature or very general, and generic,” he said.

The SA Reserve Bank also responded to Africapacity’s claims of the latter’s being in the process of buying VBS Mutual Bank. “The authorisation to conduct the business of a bank/mutual bank (banking licence) is not transferable and requires a formal new application for such authority to be submitted to the regulatory authorities,” said the bank. The SARB explains that a bank’s assets may be acquired with the prior approval of the regulatory authorities, but the licence is a separate issue.

“VBS was placed into liquidation by the High Court of South Africa on 13 November 2018 and its banking activities and licence suspended. VBS is therefore under the control of the duly appointed provisional liquidator, Mr Anoosh Rooplal,” said the SARB.

In a radio interview last week with Arabile Gumede for The Money Show (on Radio 702), Africapacity’s chief investment officer (CIO), Enock Ratlabala, was confident that they could buy VBS and turn it into a major asset for the country. “From our funds, we can turn VBS into one of the major banks and we’ve got enough capital. We’re saying we’re ready to take this bank up,” he said.

When Gumede questioned him on where the funds would come from for this venture, Ratlabala was very evasive. “That one is a topic for another day. But we have raised the money … it’s not a new story. They [SARB] know about it,” he said.

Questions about Africapacity’s funders and the company structure were sent through to the VBS Stakeholders Forum, but were answered by Enock Ratlabala.

“We are awaiting the … provisional liquidator, and the SA Reserve Bank to accept the rescue offer. Once they have accepted, we will do a press conference and your questions will be covered at the press conference,” he said

Who are the investors?

In April this year, Limpopo Mirror tried to find out who Africapacity really is. Records from the Companies and Intellectual Property Commission (CIPC) show that the company was registered in 2009 and has two active directors, namely Nomzamo Xabanisa (31) and Nombini Xabanisa (42). The company had previously been in the process of deregistration but became active again in 2017. The registered address is in Rondebosch, Cape Town.

The CIO of the company, Ratlabala, said at the time that it was a 100% black-women-owned company with the majority of shareholding and investment coming from overseas. He said Africapacity was a subsidiary company that was involved in project funding and development of infrastructure projects that ranged from integrated housing development to shopping centres, office parks and public facilities.

In a letter addressed to the Reserve Bank Governor in August 2018, Ratlabala states that his company has “gone out to China and America” to seek investments and has secured more than $50 billion for infrastructure development.

When Ratlabala was questioned as to who the investors were, he did not want to disclose details. “This is a private agreement between us and them; it is confidential,” he said. “These are loans to our company, not to public or government institutions. The conditions and interest is between us and our funders and it is not for public consumption.”

Both these institutions have chequered reputations. In January 2018, the Shanghai Pudong Development Bank was fined $72 million for illegal lending activities. This was one of the stiffest penalties handed out in China’s crackdown on wrongdoing in its financial markets. The China Banking Regulatory Commission’s bureau in the Sichuan province accused the Chengdu branch of SPDB of falsifying loan deals and hiding non-performing assets.

The bank is, however, one of China’s big commercial banks. According to Reuters, the bank operates its businesses in domestic and overseas markets, with China as its main market.

Manna World Holdings Sovereign Trust (MWHST) is apparently some sort of cult movement, believing in a new world order where money does not fall under the control of governments. On one website, the “Kingdom of Manna” trust is described as “the keeper of the collateral accounts for all nations. After many attempts by Manna to release funds to Nations and (being) blocked by the elites and corrupt governments, the Kingdom of Manna has been established to free up Nations and give back Sovereignty to all.”

In an effort to prove that the SA Reserve Bank does not have the authority to regulate the banking industry, Africapacity distributed a letter supposedly written and signed by Manna’s “Acting Head of State”, Kimberly Ann Goguen. In the letter, she claims that the SARB is a corporation owned wholly by MWHST. She then proceeds to “give it back” to the people of the country. “Manna World Holding Trust recognizes the only Royal Monarchs of South Africa to be the Tribal Kings as appointed by the people,” she states. 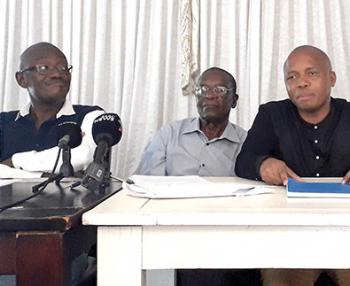