We know him as Bruce Murray, the always-helpful face at the Stamp & Sign Shop in Louis Trichardt, but on another continent he is known as the Marquis of Tullibardine. He is commander of the Atholl Highlanders, the only private army in Europe, and two weeks ago, he presented the colours of the regiment to her Royal Majesty, the Queen of England.

Bruce’s family comes from the Clan Murray, one of the oldest noble families in Scotland. His immediate family had very little contact with the old family traditions while they were growing up in South Africa. His father, John Murray, was born in South Africa in 1929 and later settled in the northern parts, where he worked as land surveyor.

When the 10th Duke of Atholl died in 1996, he had no children to whom the title could be passed on. The next heir in line was John Murray, who was living in Tzaneen by then. He subsequently became the 11th Duke of Atholl and his eldest son, Bruce, acquired the title of Marquis of Tullibardine. Bruce’s eldest son, Michael, became known as the Earl of Strathtay and Strathardle.

Although the titles are mostly ceremonial, there is a responsibility attached to it to continue traditions that stretch back over several centuries. One of these traditions is to command the Atholl Highlanders, a regiment whose roots stretch back to 1777, when it was raised for service in America. Before the regiment could leave for the war, however, it ended, and in 1783 they were disbanded. In 1842 and 1844, Queen Victoria visited Scotland and the regiment provided the Guards of Honour. In recognition of this service, Her Majesty granted them colours and thus, the right to bear arms. The original colours were presented by Lady Glenlyon on behalf of the Queen on September 4, 1845.

In the years to follow, the Atholl Highlanders took part in several regimental parades and took part in the Braemar games. After the First World War, these parades fell into abeyance and the regiment was mostly seen only when the pipers performed on special occasions. In 1966, the 10th Duke of Atholl decided to revive the regiment and to hold annual parades. From small beginnings, the regiment grew to 100 members. Soldiers are mainly local residents, although the officers are recruited by invitation from the Duke.

As was the custom, the annual parade is held during the last week in May at Blair Castle. This historic castle has been the ancient home and fortress of the earls and dukes of Atholl for over 725 years. Today, this castle is a world-class tourist attraction and is Scotland’s most visited private home. It displays beautiful furniture, paintings, arms and armour, china and other unique treasures which present a picture of Scottish life from the 16th century to the present day.

The Braemar gathering is an annual event, with the Queen as patron. Traditionally, the Atholl Highlanders march over the hill from Blair Castle to Braemar, a distance of about 40km. This march was first done in 1845 and five times until 1873. The regiment then had a short “breather” for 100 years, before continuing the tradition in1973. The last time the march was held, was in 1982.

This year’s march was very significant, because it involved presenting the regimental and royal colours to Her Majesty, Queen Elizabeth. It was also the first time that the Marquis of Tullibardine took command of the Atholl Highlanders.

“She (the Queen) simply touched them and, after a few friendly words of curiosity, allowed me to march the men off,” said Bruce. His two sons, Michael and David, were also on parade, each co-commanding half a company. The two young men live and work in London and have already become a part of that local community.

“It was quite an honour and privilege for a South African to take part in such a ceremony,” said Bruce this week while trying to catch up on all the work that had piled up while he and his wife, Charmaine,the Marchioness of Tullibardine, visited Scotland.

For the next couple of months, his life has returned to normal and he can be the entrepreneur who enjoys motorcycle riding on the odd weekend off. Early in 2012, he will join the Atholl Highlanders when they visit the town Athol in Worcester County in Massachusetts, USA. The regiment, because of its connection with this town, was invited to take part in a parade there to celebrate the town’s 250th anniversary. After this visit, the regiment will pay a quick visit to Bermuda, at the invitation of the governor there.

For a couple of weeks he will then once again take on the role of Marquis and officer commanding of a private army. 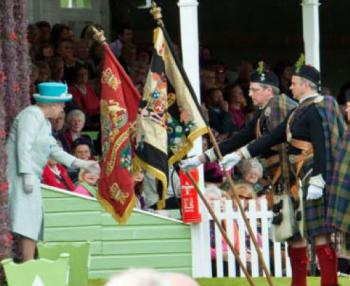 We know him as Bruce Murray from Stamp & Sign Shop in Louis Trichardt, but on another continent he is known as the Marquis of Tullibardine. He is commander of the Atholl Highlanders, the only private army in Europe, and two weeks ago, he presented the colours of the regiment to her Royal Majesty, the Queen of England. Photo top: Her Royal Majesty, Queen Elizabeth, touching the colours of the Atholl Highlanders during the parade. Photo right: Lt Col James Murray (left) and Lt Col Bruce Murray.