Shawela United were crowned champions of the tournament of the Minister of Cooperative Governance and Traditional Affairs, Mr Richard Baloyi, in Giyani last Saturday.

Boosted by home-ground support, Shawela United beat Njhomela FC 4-3 to lift the cup for the third time in a row. Community members of Shawela village, who had come in numbers to support their beloved team, celebrated the achievement.

The other two teams that played in the semi-finals were Mhinga Viking, who finished in third position and walked away with R3 000. They were followed by Lombard Happy Boys, who received R2 000. 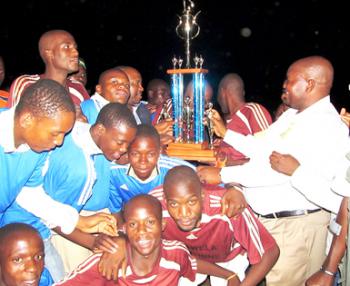 Shawela United celebrate their victory with the Minister of Cooperative Governance and Traditional Affairs, Mr Richard Baloyi (right), after the tournament at Shawela village in Giyani last Saturday.

Peter Muthambi graduated from the University of Venda with a Bachelor of Arts degree in Media Studies. He started writing stories for Limpopo Mirror as well as national papers in 2006. He loves investigative journalism and is also a very keen photographer.