From the jaws of death to a gospel star

Today he is an international gospel artist, an ANC councillor, radio presenter, pastor and an albinism activist, but for Mbilu Rapson Rambuwani, life has not always been this comfortable. When he was born, he had to be rescued by his mother as some family members wanted him to be killed because he was born with albinism.

His late mother had to hide him very far from the killers to save his life. Family elders had allegedly regarded him as a curse from the gods and were also concerned that the family would be humiliated for giving birth to an albino child.

“I was very angry when my mother told me how she had to hide me from my own uncles. But today, I am the one who is helping them the most. As a pastor and a servant of God, I have forgiven them,” he said.

As if that was not enough, Rambuwani had a tough time when he grew up because many children did not want to play or touch him in his neighbourhood and at school.

“I used to play alone at home and sit alone at school. Because of a lack of knowledge, other kids were afraid that if they came next to me, I would transfer albinism to them. They did not even want to eat sitting next to me. I was a loner, and my heart was always very painful. But I knew deep down in my heart that God had something special that He created me for,” he said.

After he passed Grade 12, Rambuwani was employed by the Mavhoi Technical College as a clerk. He worked there for several years, but the stigma of being an albino was always there.

After launching his musical career, he resigned to become a full-time musician. From 1991, Rambuwani started making headlines in the Mirror newspaper and on local radio stations for releasing hit after hit. He was also the first local artist to record gospel songs in Shona. One of his songs, Nyarara Maria, became like a national anthem to Zimbabweans who are living in South Africa and in other countries around the globe.

The past Sunday, Rambuwani was at his best on Univen FM. Rambuwani joined Univen FM in 2006 and has not looked back. He is a councillor in the Vhembe District Municipality tasked with the special programme on women, the youth and people living with disabilities.

He concluded by saying he was working on his latest album, which will be released soon. 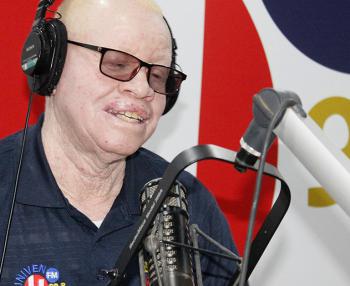