The state of the dirt road used for transporting pupils to the Ridgeway Independent School just outside Makhado is causing headaches in all seasons.

The dust cloud brought about by road users is now beginning to cause health problems for the children.

“The children suffer from sinus infections and bronchitis, due to the dust. Close to 200 children are transported to and from the school twice a day, and trucks from the Entabeni plantation also use this road. At times, the visibility is zero and it is dangerous,” said the school’s principal, Ms Magriet Swanepoel. Because of the hazard, pupils are not allowed to cycle to school, for fear of their being run over.

Swanepoel notified the Vhembe District Municipality (VDM) of the road hazard on 17 February this year. That was two weeks after an accident on the road resulted in a vehicle's being written off, though the occupants fortunately only suffered minor injuries.

“It is surely just a matter of time before a fatal accident happens due to the state of this road,” reads the letter to the VDM. The school has urged the municipality to tar this 1km portion of the road from Tshirululuni Street to the entrance of the school.

“For the past five years, we have been sending letters and e-mails and making phone calls, but with no result, other than the odd grading of the road, which is not a permanent solution,” said Swanepoel.

The school’s Grade 5 pupils recently conducted an experiment to determine the reach and extent of the dust. They put Vaseline-coated tiles in different parts of the school premises. They found that dust and sand had settled onto all the tiles after only an hour.

Dust might be the biggest problem now, but in the wet season it is mud. When it rains, the road is often so muddy that only 4x4 vehicles can reach the school. On some occasions, the mud was so bad that “pupils had to walk to school, supervised by willing parents and staff”. There were even times during the rainy season that the school had to close down altogether!

The letter was received by the VDM on 27 February, but to date the school has received no answer. When asked for comment, VDM spokesperson Mr Matodzi Ralushai said on 11 June that he would have to make some enquiries about this road to find out whether any processes had been started in that regard. 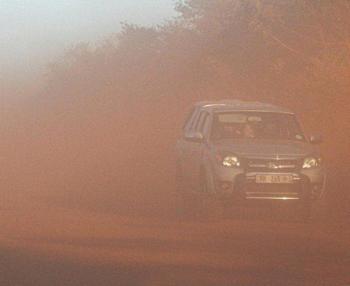 The dirt road from Tshirululuni Street road to the Ridgeway Independent School is clothed in dust when 200 children have to be transported to and from the school. The frequent dust cloud has now become a health hazard for the children and the school has once again urged the district municipality to tar the road.

The entrance of the Ridgeway Independent School is one big dust cloud during early morning peak traffic.

Linda van der Westhuizen has been with Zoutnet since 2001. She has a heart for God, people and their stories. Linda believes that every person is unique and has a special story to tell. It follows logically that human interest stories is her speciality. Linda finds working with people and their leaders in the economic, educational, spiritual and political arena very rewarding. “I have a special interest in what God is doing in our town, province and nation and what He wants us to become,” says Linda.