Dangers of forest fires in the spotlight

In a move to create forest fire awareness among the youth in the Vhembe district, the Komatiland Forests invited schools to enter a competition in different categories such as drama, poetry, visual art and creative writing under the theme “Veld and Forest Fires”.

A large number of schools entered and the Komatiland Forests and other corporate growers also visited all these schools prior to the competition event, which was held at Entabeni Plantation a fortnight ago.

“The response by the learners and their schools is heartwarming,” said Komatiland forester Norman Khosa. “We want to believe that our yearly campaigns have also made a huge impact on the prevention of forest fires and structural fires.”

A drama group from Raluthaga Primary School won the drama division, with Mutshipise Primary second and Tshikurukuru Primary third. “We are more than happy about winning the event,” said a senior educator at Raluthaga, Ms Mukondeleli Nephiphidi. “The knowledge that our pupils got during the competition will help them understand the danger of veld and forest fires.”

During the event, the Makhado Fire Protection Association awarded 14 community members certificates for combating fires at Entabeni Plantation, Thathe Vondo, during 2012 fire season. At least nine people came from the Tshitangani village and five were from Murangoni village. 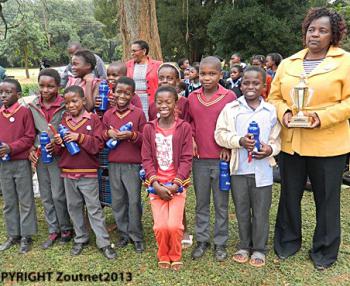