Is he the Univen serial killer? Ndivhuho Ntsieni (24) from Thohoyandou Golgotha briefly appeared in the Thohoyandou Magistrate's Court on Thursday in connection with several murders that had taken place in the area surrounding Thohoyandou and the University of Venda during the past months.

The court was packed to capacity and a large number of people, who included placard-waving students, arrived at court to get a glimpse of the man accused of having terrorised the community and students for several months. He was arrested on Tuesday evening where he resides in Thohoyandou Unit C.

The case was postponed to 21 October for further investigations and he remains in custody. He faces 16 counts, which includes four murders, attempted rape, robbery, kidnapping, rape and and attempted murder.

Local religious leader, Dean Alunamutwe Randitsheni said that "the suspect should rot in jail. We have had enough of heinous crimes in our community and we commend the police for swiftly arresting the suspect. Our community was no longer safe and with the arrest we can now breath freely," he said after the postponement.

The provincial police commissioner of Limpopo, Lt-Gen Fannie Masemola, announced during a media conference in Polokwane on Wednesday that a Univen student identification card and cell phone, both belonging to Sandy Thagisa, had been found in Ntsieni 's possession. Thagisa was heavily assaulted at Golgotha near the Univen campus in May this year and had to be rushed to a local hospital. She was later transferred to the Polokwane Provincial Hospital and is at present in the intensive care unit of a health institution in Gauteng.

Also found in his possession were a cell phone belonging to the late Brenda Ndove and a hairpin belonging to another murdered woman, Livhuwani Mbodi. 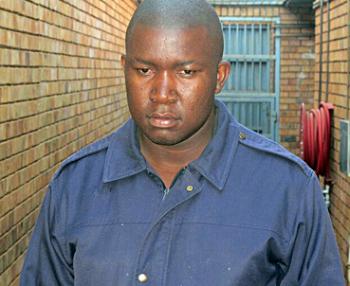