The latest victim of a suspected serial killer, Brenda Ndobe, has been laid to rest at her home village of Tshisaulu last Saturday.

Her funeral was attended by her colleagues from the University of Venda as well as the senior manager of Univen, students, members from the ZCC, family, relatives and community members.

She was killed on 18 July when she was about to report for work at Univen. Her death sent shockwaves through the community, as she was the second victim to have been killed in the same style at the campus.

Two more victims, Tshililo Ndou (9) and Alice Mashau (8), were also raped and killed in the same manner at Golgota, hardly a kilometer from Univen, during the past three months.

Ndobe's killing made people suspect that a serial killer was on the loose. Following a serious manhunt by a provincial task team, former Univen science student Ndivhuwo Ntsieni (24) was arrested. According to the police, Ntsieni is linked to the rape and killing of four victims, but investigations are continuing.

Ntsieni, who was allegedly found with items belonging to the victims, appeared in the Thohoyandou Magistrate's Court last Thursday and the case has been postponed to 21 October. 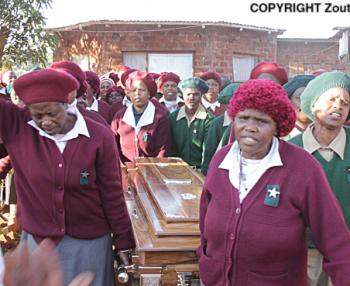