Police clamp down on illegal squatters

The Makhado Police launched an operation last week to clean the surrounding area next to the municipal dumping site along the Vondeling road outside Louis Trichardt.

They were supported by the local traffic department and fire brigade when they went in on Thursday to clear up the area. Residents staying along the Vondeling road have been complaining about people who set up shacks.

According to local police spokesperson Const Irene Radzilane, nine illegal shacks were dismantled and burnt to the ground. Some of the inhabitants were apparently locals, while those who were from Zimbabwe had legal permits to be in the country. All of the inhabitants were warned to relocate elsewhere as they were staying on private property.

Judging by the remains the squatters formed a small community of their own. Everyone's "house" (a clearing under a thorn tree) was connected with a bush trail and consisted of a cooking and sleeping space.

The clean-up action was an effort by the police, said Radzilane, to curb crime in and around Louis Trichardt. 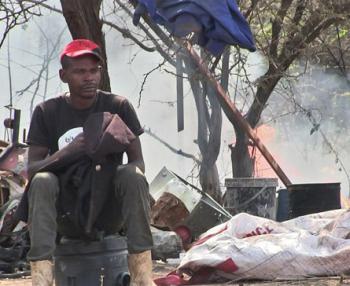 One of the squatters sits on a discarded vacuum cleaner among the burning remains that used to constitute a thriving illegal squatter camp. (Readers can watch a short video on www.zoutpansberger.co.za).