Is William town's next top model?

William Scott, a local model recently discovered and selected to represent the region at the Limpopo Face of Fashion 2018 Modelling Competition, has done himself and the town proud by winning the competition.

A lot of excitement was generated last month when news broke that Louis Trichardt could possibly once again provide the world at large with talent and beauty, as had happened previously with model and actress Christina Storm, when William (22) made it to the finals of  the competition.

This prestigious competition took place at the Mall of the North in Polokwane on 1 September, with 10 male and 10 female finalists competing for the number-one spots. The most sought-after prize was a contract with the international Ice Modelling company, which would instantly boost the winner into the sights of top designers and agents around the globe.

Discovered by Sharon Stander of Ace Models only recently, and having never even considered a career in modelling, William was hugely surprised to have made it to the top 10, and even when he had done that, he could not imagine beating seasoned professionals in the business.

With pre-show nerves at an all-time high, the day before William was supposed to drive through to Polokwane for the competition, his car’s rear windscreen shattered. This meant that he could not drive himself and, after everyone he called could not help him either, he said he had felt so hopeless that he had almost given the whole thing up. He made it through eventually and won the show, which he says is a good reason never to give up. “I’m so happy that I didn’t give up and worked through it all instead,” he said.

The event started off with the pre-party on the night before the competition, and then a 06:00 start to the big day. Hours of choreography and practice followed before the main event where the competitors modelled creations from various fashion houses and designers, including Icon and Markham. The competition went off smoothly, with live music from the band Go the Rodeo as background for the practiced sets of movement. After many sets on the ramp, which had all been installed in a movie theatre at the Mall of the North, celebrity judges Joani Johnson, Steffi Rinaldi, Casper Bosman and Corné van Niekerk made their decisions and the master of ceremonies, comedian and entertainer Schalk Bezuidenhout, announced the winners.

William said that he was blown away by the sheer quantity of wonderful prizes, some that he had brought home with him, and some that he had yet to use, such as being chauffeured on assignments by Lexus. Ice Models will be flying him to Cape Town soon to officially sign his contract, and William plans on doing the best that he can in everything that comes his way in the future. 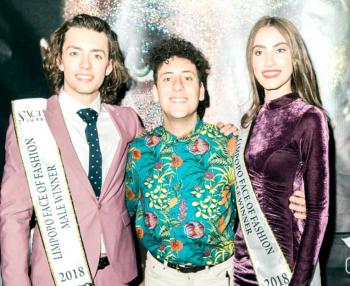 William Scott (left) with the master of ceremonies, entertainer Schalk Bezuidenhout, and the female winner of the Face of Fashion 2018 Model Competition, Michelle Fox (16) from Polokwane.