Recently, various media reports have stated that nine of the 13 biggest baobab trees in southern Africa had collapsed or died in quick succession. Some experts have suggested that climate change may have played a key role in their downfall, although research is still ongoing.

These gnarly giants are very much a part of the Limpopo landscape and tourist industry, and so their health and wellbeing are important to the people of this district. After the publishing of a conclusion in a 2018 study, headed by Stephan Woodborne and Adrian Patrut, in Nature Plants that baobab trees are dying at an unusual rate, several news articles in highly respected publications such as National Geographic and the New York Times appeared to indicate the imminent extinction of these mighty trees.

Baobabs are staples for many villages in Africa, supplying nutritious fruit and leaves in times of drought and with the bark being used to make a variety of items to sell. At least as far back as 4 July 2016, the general health of these trees has been a concern. Reuters published an article on that date, revealing a disease that has been attacking baobabs in Zimbabwe with devastating effect. Trees that had had their bark removed by either wild animals or people succumbed first, but healthy trees soon followed.

At that time, they reported that little research was available on the cause, other than that they suspected a fungal organism. Research is still ongoing, but at this point three new Graphium fungal species have been discovered from dying baobabs in South Africa and Madagascar. As with the invasive and highly destructive Polyphagous Shot Hole Borer beetle and its symbiotic fungus, Graphium fungi species are also commonly linked to insects. This according to a survey conducted by Elsie Cruywagen at the Forestry and Agricultural Biotechnology Institute (FABI) at the University of Pretoria, who is also the discoverer of the new fungi.

What started the spate of claims that the baobab was facing extinction as a result of climate change was the study by Woodborne and Patrut. The actual aim of the study, however, was to date the oldest living baobabs accurately. Rather than prove rumours of 6000-year-old trees, the study instead purported that the majority of both the very oldest and the largest trees, or significant parts of them, had collapsed or died in the past dozen years. News of the death of the mighty trees spread and links to climate change were reported as a possible cause. While certain species of baobab are listed on the International Union for Conservation of Nature (ICUN) Red List of Threatened Species as threatened, the African Baobab, genus Adansonia digitate, has a status of “Least Concern” on the South African National Biodiversity Institute (SANBI) Red List of South African Plants.

The Zoutpansberger turned to local internationally respected expert on these trees Dr Sarah Venter (BSc, MSc, PhD) for more information. Venter told the Zoutpansberger that the report had not said that climate change was responsible for the falling of the trees, but rather that climate change might be one of the factors. “I believe the trees collapsed from mechanical failure,” said Venter. “The trees get so big and the branches so heavy that they just collapse or fall apart. Most of the collapsed trees continue to grow for hundreds of years more.” Asked about certain recent reports mentioning newly dated ages of some of the big baobabs at between 3000 and 6000 years old, she said that “[n]o baobab has been reliably dated to 6000 years. The oldest baobab in South Africa is the Glencoe Tree in Hoedspruit, which has been reliably dated to 1800 years old”.

While emphasising that the subject of what the climate would have been like 3000 years ago in this district was the area of expertise of a paleo-climatologist, rather than her own, Venter said that, over that period, a lot of climate fluctuations had occurred, from very wet to very dry. She said that many hundreds of thousands of baobab trees were still left. “I am glad to report that baobabs are not dying out. The one tree I would recommend that everyone put on their bucket list to see would be the Sagole tree. It is the biggest and one of the oldest-dated trees in Africa. And it is on our doorstep!” The Sagole tree is 30km north of Tshipise.

Venter wanted people not to panic at the thought of a world suddenly without baobab trees. She encouraged locals to plant baobab seedlings and look after them until they were three metres high. “Give them lots of water to help them grow fast, and never cut a baobab tree down.” She further explained that baobabs can and do die from many things, such as droughts, even though they are unique in that they can use up to 75% of their trunks to store water. If they are not tall enough, young trees die from over-grazing by livestock and game. Elephants also like to eat the trunk, resulting in the trees’ collapsing. She said that because the trees were fibrous, like a loofah, the wood disintegrated very quickly when they dried up.

Dr Venter operates the Baobab Guardian programme, which is easy to find online and fun to join. Her current goal is to plant 100 trees and she has just 25 to go, so she would appreciate new supporters. “Many thousands of baobab trees are producing fruit. They will continue to do so for many years to come, so no threat to them exists from harvesting the fruit. We always have enough for future trees to grow, but the problem is livestock and game animals that eat the seedlings that germinate. We need to protect these seedlings until they are taller than the goats or kudu that like to eat them, when they are three metres high.” 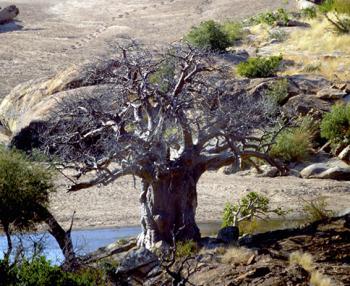 The baobab tree is a much-loved symbol of this area and worth arranging to visit while the bigger specimens are still standing.