Unrest yet erupted once more in the Madabani area, this time because of a suspected ritual killing. The body of Mr Johannes Khangale (66) was discovered by his nephew on the night of April 15. He was found in his room in a pool of blood, with a piece of rope around his neck. Some of his body parts had allegedly been removed, causing all the blood.

News of the murder spread like wildfire, with hundreds of people streaming to the scene. Angry community members blocked the road to Kutama last Wednesday night (17th) with branches of trees and various other objects. They accused the police of not doing their job to arrest the suspects.

The nephew of the deceased, Mr Bally Rambau, said that he had last seen his uncle on the 13th and had tried to phone him several times, but his phone had kept on ringing. When he visited him on the 15th, he found him in a pool of blood with the rope around his neck. He said that he had shouted for help and other community members had alerted the police.

Rambau said that the family members were devastated by the news of the murder. “How can they do this? They deserve to be punished; this is cruelty at its worst,” he said. “Breaking the news about his death was a mammoth task for me, and it was so difficult for them to accept,” he said.

Khangale was not working and survived on his grant, his nephew said. “My uncle was a loving person who made sure that we were all raised well, irrespective of his not working. We will always think of the good he did for the family. He was such a wonderful person; we are totally devastated by his death,” he said.

Rambau said that they were still waiting for the results of the post-mortem. Khangale was buried last Friday.

Mr Sy Mukhuba, a community member, said that they were deeply shocked by the incident. “We do not know exactly what had happened, and all we have here are rumours doing the rounds,” he said.

“We are now living in fear and we do not know who will be the next, as these people never seem to get enough of our family. Look, they killed a defenceless elderly [person] and we do not have any doubt that they killed him for muti,” he said.

Mukhuba said all indications made them believe that foul play tainted the whole incident. “We are very worried and saddened about the whole incident, and we are waiting for answers to unravel the mystery. Police should do their best to dig deep in this case and the culprits should be brought to book,” he said.

Brig Mojapelo of the SAPS confirmed the case and said they had opened an inquest docket. “We are busy with investigations and we will get to the bottom of the case,” he promised.

Mojapelo added that they did not have conclusive evidence linking it to a ritual murder, but if the post mortem pointed to the contrary, the case would be changed. He cautioned community members to desist from spreading rumours and to give the police a chance to do their work. 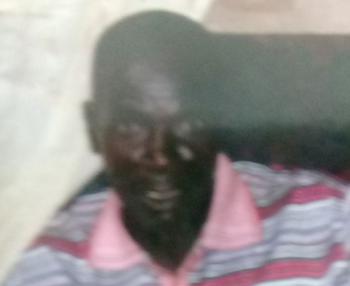