During the 2016 local government elections, residents of Vuwani took a stand that they would not take part in the elections, protesting their disputed move to the new Collins Chabane municipality.

Since then, several shutdowns and court cases have taken place in a bid to convince the demarcation board to redetermine the borders and take the people of Vuwani back to Makhado Municipality.

Elections and the shutdowns were used as bargaining tools by residents but have not yielded any positive results. The recent national election was believed to have been the last hope for the residents, who had hoped that they would be taken back to Makhado before the election, but that did not happen.

A few days before the election, residents gathered at the Vuwani stadium for a fresh mandate. However, just before the meeting could proceed, heavily armed police disrupted the meeting by firing teargas and rubber bullets. The police later apologized to the community, saying the disruption had been uncalled for.

The community decided not to take part in the election and a total shut down was imposed in the area. Last Tuesday, the national police commissioner, Gen Khehla Sithole, visited the area to check on the state of readiness and announced they had deployed more than 1 500 police officials and other law-enforcement agencies to ensure a peaceful election.

On election day, police were everywhere in the area, but unlike before, when the community was united, some communities went out in their numbers and voted, while only the community of Vyeboom did not vote.

At one voting station at Vyeboom, only two people, who included a journalist from outside the area, had voted at the polling station. The gate to the station was locked and the IEC had to use tents at the gate.

In the town of Vuwani, offices and businesses were shut down for the day.

This has painted picture of a divided community, with some saying they could not miss the chance to vote as they had not voted before.

Some are now accusing the Pro Makhado Task Team of being a small group of individuals who are self-styled and taking decisions on behalf of most of the people of Vuwani.

The election did not proceed without drama. Just on the eve of the election, outspoken Pro Makhado Task Team member Mr Arnold Mulaudzi was arrested and was charged under the electoral act.

This angered the community and a stand-off ensued between the police and residents when the residents wanted to hand themselves to the police in solidarity with the arrested leader.

The police had to fire teargas and rubber bullets to scatter the protesters. Mulaudzi appeared in the Vuwani Magistrate’s Court on Thursday and was granted R5 000 bail.

Pro Makhado Task Team leader Mr Takalani Mukhudi said they had gone to the police station after hearing of the arrest. “We wanted to show the police that we are not running away and that we are peaceful. As a community, we are still committed to going back to Makhado.”

Mukhudi dispelled the rumour that division existed in the leadership of the Pro Makhado Task Team, saying they were still intact and carrying the mandate of the residents.

Chief Livhuwani Matsila of Matsila Village, who bravely encouraged and influenced all residents to vote, said it was all systems go in his area and surrounding villages, where residents voted in their numbers on election day. 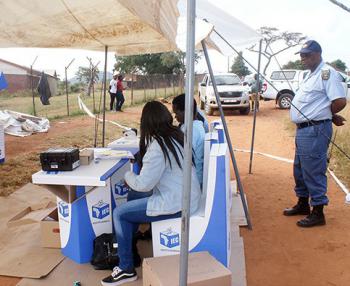 A deserted polling station at Vyeboom where voting did not take place.