Well-known traditional healer Alufheli Nemavhola Tshiphotho (42) has issued a strong warning to fake traditional healers who mislead community members with the aim of ripping them off and taking their hard-earned cash.

Tshiphotho, who stays at Masisi village, has been a traditional healer for more than 25 years. He inherited his healing powers from his late father, Joseph Mmbengeni Raphalalani Tshiphotho of Tshipako village, who passed away in 2016.

Tshiphotho, who has three wives and 16 children, says although South Africa is a democratic country, he is of the view that traditional healers are not given the respect they deserve when compared to western medical practitioners. “We also need recognition to be able to get into public hospitals and assist patients. There are conditions that cannot be treated by modern medicine and we should be allowed to come in and assist doctors in hospitals. That is the only way we can jointly save lives in our communities.”

He says traditional healing has been circulating within the family for decades. “Most of our forefathers and foremothers were traditional healers. My father took over from his late father, Mukhwatha Jim Raphalalani, who died many years ago. The chain did not break as I also took over from my father. Even the bones that I’m using now to communicate with the ancestors have been passed from generation to generation. My son, Paul Nemavhola, is also following in my footsteps.”

Tshiphotho says he used to accompany his late father to the bush to collect medicinal plants. “I would always be there whenever he went, and he taught me everything about traditional healing. I remember one day when he was not around, and I was followed from the playground by family members to come and assist patients who came for consultation. I was very young then, but I managed to assist them accordingly. Since then, I have come to conclude that I was born to help people through traditional healing. I feel good because I receive and help patients from as far as Durban, Johannesburg and other parts of the country, including those from our neigbouring countries such as Zimbabwe, Botswana and Mozambique. They also do referrals to their friends and family members after I have assisted them accordingly.” 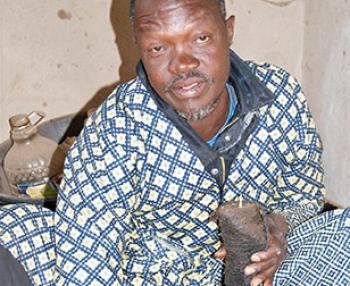