Politicians and officials are often quick to blame contractors for incomplete projects, but what if such an incomplete project is a case of administrative blundering? The reason why dozens of RDP houses in Tshivhuyuni, Muwaweni, Wayeni and Mufeba were never completed may be a combination of many factors.

Two weeks ago, the national chairperson of the committee on Cooperative Governance and Traditional Affairs (Cogta), Ms Faith Muthambi, joined the Speaker of Makhado Municipality, Ms Lindiwe Mohale, and the ward councillor on a visit to an area where RDP houses were to be built.

Allegations were made that the contractor had abandoned the project in 2018, leaving the beneficiaries with unfinished homes. The beneficiaries claim they cannot complete the houses by using their own money, citing poverty and unemployment. Residents now demand to know why the project had been abandoned.

One of the beneficiaries, Ms Tshifhiwa Munyai, told the delegation that the foundation of her house has been left unfinished. “I was happy when they dug the foundations in my yard. I thought my children would have their own room. Instead, people later came to refill the trenches,” she said.

Munyai lives in a mud house, which is also in a state of near collapse. She said this posed a danger to the lives of the family members, especially during the rainy season. She said they had notified the local ward councillor about their plight, but no action had been taken.

Munyai said she was struggling to take care of her family. “I wish I had money. I could have completed my house, which was left incomplete. It is painful because we had hopes of becoming better people. My heart is aching.” She said the contractor who had been given the tender last year to build RDP houses in the same area had finished the project, but the one who had been given the tender in 2018 had abandoned the contract.

Ms Faith Muthambi described the situation as “fruitless and wasteful” expenditure. “The municipality and councillors are fooling around with our people and should take responsibility for failing to monitor the project.” She said during her visit to the village she would not tolerate shoddy developers who did not finish projects after they had been awarded tenders. “Harsh measures will be taken against contractors who do not take their job seriously after being awarded tenders,” she said.

She added that not finishing government projects affected service delivery. “We do not want service providers who, when awarded a tender, forget about the project. We need people who are serious about service,” said Muthambi. She said she was going to meet with the Limpopo executive member of Coghsta, Basikopo Makamu, to request him to investigate what had happened to the abandoned project.

Coghsta spokesperson Mr Masedi Molebatsi said a commitment had been made that all the projects in the province would be completed. “We are quite aware of the RDP house problem in the province. We know that there are people who have been waiting for their houses for a long time, and this was because the developers or contractors that were appointed were failing to complete the houses,” he said.

He said many houses in the province still needed to be completed. He appealed to the affected families to be patient while their problems were being attended to.

When Limpopo Mirror managed to trace down the contractor responsible for the project, Ms Florence Rangata of Dipetle General Construction, she painted a completely different picture. According to Rangata, her company had been awarded a tender of R7 million by COGTA to build houses in the area. Everything started off well, but then the department stopped paying her. After she had been paid R4 million, the money dried up.

Rangata explained that she had had to cut down on the number of houses. She said that she had left 15 houses unfinished at Muwaweni, one at Mufeba, 10 at Muwaweni and one at Tshivhuyuni. All the building material that was left over is in storage at Mashamba. She further said that the department had told her that their budget was depleted, which is why they did not pay her to complete the project. 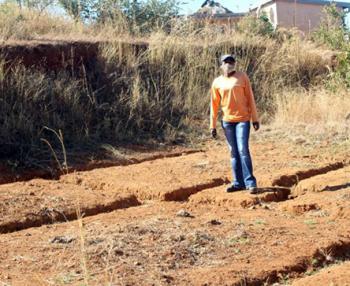 The beneficiary, Ms Tshifhiwa Munyai, stands in the foundation of the RDP house allegedly abandoned by the contractor at Tshivhuyuni in 2018.