The faces of evil

The recent conviction of three family members for the brutal ritual killing of the 26-year-old Hlayisani Hlungwani of Nsavulani Village is once again proof that evil lives among us.

The Thoyondou High Court convicted Hlayisani’s 56-year-old mother-in-law, Christinah Mhlongo, 67-year-old father-in-law Solomon Mqengeni Mahumani and a friend of theirs, the 51-year-old Amos Mafemani Chuma, last Thursday of this heinous crime on 17 April 2017 and sentenced them to life imprisonment.

Securing a conviction against the three was greatly due to the evidence given by Hlayisani’s brother-in-law, Daniel Dzambukeri. Dzambukeri pleaded guilty to being an accomplice to his sister-in-law’s brutal murder at the beginning of the trial and volunteered his testimony to “free his soul”.

The court heard that on the morning of that fatal April day in 2017, Dzambukeri had lured his sister-in-law into Chuma’s vehicle with the promise that they would take her to fetch her daughter, who was visiting her grandmother at Hlomela village. They were accompanied by Mhlongo and Mahumani. The five of them then started driving to Hlomela.

Upon reaching Hlomela village, however, Chuma stopped the vehicle in a secluded donga where Hlayisani was forcefully pulled from the vehicle, dislocating her hand in the process. She was then tied to a fallen tree stump, after which Mhlongo, Mahumani, Chuma and Dzambukeri left the scene.

Dzambukeri testified that all of them returned to where they had left Hlayisani after 18:00 on the same day, where they found her still tied up. The court heard that Mhlongo stripped herself naked and took out some muti that looked like elephant dung mixed with an oily substance, which was rolled in a red cloth. She then started burning the muti while, having knelt to the ground, chanting to  Hlayisani’s ancestors the words “these are leaves of your child to use to make muti” and, at that point, Hlayisani was untied, held and pinned to the ground on her back by Dzambukeri and Mahumani, as well as Chuma, who had an Okapi knife with him.

The court heard that Chuma started stabbing Hlayisani on her forehead as she was putting up a tremendous fight. Ultimately, however, Chuma first severed her lips, followed by both her breasts and lastly her private parts (vulva). The severed parts were then handed to Mhlongo, who continued chanting to Hlayisani’s ancestors, saying “here are the leaves of your child; ancestors accept that we use them as muti”. Mhlongo then placed the body parts on the said red cloth.

While all this was going on, the court heard that Hlayisani was still alive. She was pleading with the four to stop for the sake of her daughter. They did not. Dzambukeri testified that, after the process of cutting off Hlayisani’s body parts, she tried to crawl away but collapsed and died with her legs still stretched wide open. She was later found in the same position described by Dzambukeri.

During Mhlongo, Mahumani and Chuma’s the trial, the State argued that the trio had intentionally killed Hlayisani with one common purpose – their greed and their love of money.

Mhlongo, Mahumani and Chuma pleaded not guilty and showed no remorse during the trial. The State, however, found Dzambukeri to be a credible witness. He received no favours, in return for his testimony.

In aggravation of sentence, State Advocate Absah Madzhuta called Hlayisani’s elder brother, Richard Hlungwani, to testify about the impact the killing had had on them as a family and on her daughter. Apart from the pain the family had to endure, Richard testified that his sister’s death had had an adverse effect on her daughter, who was eight at the time of the murder. She not only failed her grade but is also living in fear of her father, who is the younger brother of Dzambukeri. The fact that her mother was murdered by family members whom she knew and had visited, had left Hlayisani’s daughter devastated.

During sentencing, the court remarked that this was a barbaric crime during which Hlayisani had fought with all her energy to escape her butchers. She would have suffered a most painful death with her body parts being cut off while she was still alive. All of this happened, the court said, while her naked mother-in-law was standing in front of her and calling on Hlungwani’s ancestors to accept her spirit.

The court found that the aggravating circumstances of the crime far outweighed any mitigating factors offered by the accused and they were therefore sentenced to life imprisonment by Justice Khami Makhafola.

The Director of Public Prosecutions, Advocate Ivy Thenga, welcomed the sentence and commended the investigating team, together with State Advocate Madzhuta, for a job well done. 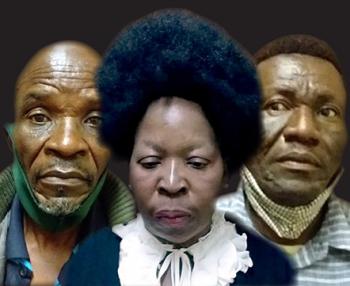