Another Mbilwi matriculant makes it into province's top three

Prayer, hard work, believing in yourself and not limiting yourself are the reasons behind the success of the Phiphidi village based Fhulufhelo Merriam Mudau, one of the top three 2020 matriculants in Limpopo.

“I worked hard, read books and communicated with my teachers of each subject,” Mudau explained. She admits that 2020 was an extremely difficult academic year, especially because of the lockdown. The fact that she had to study on her own without the regular direct contact with the teachers made it more challenging.

During the official presentation of the 2020 matric results on Monday (23rd), the Limpopo MEC for Education, Ms Polly Boshielo handed a certificate of achievement to Mudau. She also received a laptop to assist her with her studies.

Mudau said that she plans on furthering her studies at the University of Cape Town. She enrolled for a degree in medicine.

The principal of the Mbilwi Secondary School, Mr Nnyambeni Cedrick Lidzhade, was elated to learn that his school was again rated as one of the best schools in the province for producing quality results, with maths and science as major subjects.

“We have a strong foundation concentrating on the lower grades, stressing the importance of maths and science subjects. We also introduce enrichment classes, and we have suitably qualified teachers, who specialize in those subjects,” said Lidzhade.

According to Lidzhade, there is no lingering of learners allowed during schools hours. Learners must spend their time in class, studying. “We believed hard work leads to the success of each learner,” he said.

He added that Mbilwi Secondary is a member of Club 100. To be a member of this prestigious group of schools, 100 or more candidates must pass mathematics with a score of 50% or more. Mbilwi produced 219 learners who met the criteria.

The Executive Mayor of the Vhembe District Municipality, Cllr Dowelani Nenguda, congratulated, Fhulufhelo Mudau for being number three in the province. He said that she has excelled, in spite of coming from a school in what can be described as a rural area.

Nenguda also encouraged matriculants who come from poor backgrounds but who want to further their studies, to visit his office and apply for assistance from the mayoral bursary fund. 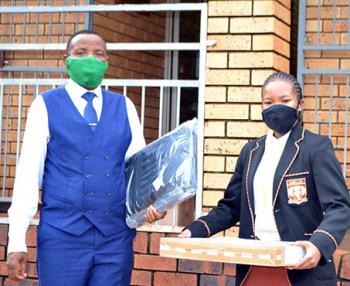