The Kutama-Sinthumule bulk-water-supply project is expected to be completed by December 2020, said Ms Lucy Kobe, head of the Limpopo Department of Water and Sanitation during a media tour of the project last week.

The project was started in 2014 and was expected to be completed by 2016. Numerous delays and, at times, a lack of funding meant that the project has still not been completed. After completion, the project is expected to supplement the supply of water to towns and villages in the Makhado municipal area.

The construction of the pipeline is a continuation of the Nandoni Dam distribution scheme. The pipeline starts at Valdezia reservoir and channels the water to the Mowkop reservoir. The budget for the project was set at R515 million and R262 million has been used up till now.

According to Kobe, the financial and administrative constraints were some of the major setbacks in failing to meet the initial deadline. “We could not meet the deadline because of the financial issues. Co-funding issues were not clearly addressed at the beginning. However, we have managed to resolve these,” said Kobe.

One of the engineers involved in the project, Mr Daniel Raseala, gave a progress report during last week’s media briefing. He outlined some of the challenges that they had to cope with, such as continuous breakdowns at the plants and a shortage of material.

Raseala said that the main pump station was at 61% of completion, while the reservoir was 68% completed. The project is expected to cater for 38 villages and will pump 7.5 megalitres of water per day. 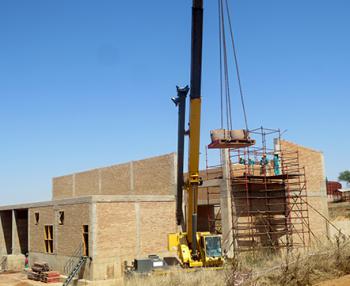 Construction at the pumping station is still in progress. The massive station is situated along the Thohoyandou road some 15km outside of Louis Trichardt.

The water pipes making their way from the Valdezia reservoir to the Mowkop reservoir.