The executive mayor of the Vhembe District Municipality, Dowelani Nenguda, has warned stock farmers from the Nzhelele area not to allow their animals to stray along and onto the roads.

He said that owners who refrained from keeping their animals off the roads would be fined. “The Nzhelele area has many stock farmers and we don’t want to see stray animals along our roads,” Nenguda said.

Nenguda made these remarks during the launch of a road-safety campaign at Mphephu High School a fortnight ago. He was joined by Thovhele Mavis Mphephu Ramabulana and stakeholders, which included police and traffic officers, bus and taxi representatives and traditional healers and pastors.

Nenguda said that most road accidents were caused by factors such as reckless and negligent driving, drunk driving and speeding. He also warned motorists to be very cautious, especially during the rainy season.

Mr Gideon Ngwenya, representing the Vhembe Taxi Council, said they were working hard at informing their drivers to obey traffic rules and not to overload taxis when they transported their commuters.

“We are trying to address our taxi drivers. Those who drive long distances are encouraged to drive safely, get rest if they’re tired and check that their tyres are in good condition before travelling. We want the taxi industry in our region to get some accolades for being second to none when it comes to obeying traffic rules,” Ngwenya said.

The Department of Transport and Community Safety representative, Ms Ndivhuwo Mashige, said they were ready to make the Vhembe roads safer than ever but also warned motorists to be very cautious of stray animals along the roads in the Nzhelele area and to stop, as this could contribute to fatalities on the roads. 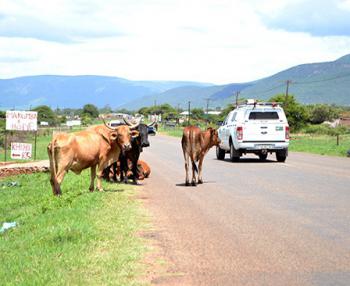 Stray animals on the Sendedza-Nzhelele road.