Charlene does it again!

Considered by some as the top social event on the local calendar, the 26th annual PPC Kremetart Cycling Race saw more than 1 000 cyclists braving the arduous Soutpansberg route.

Spectators Anet Mattheus of Gauteng and Marli Steenkamp of Limpopo were among those who cheered the riders at Stage 1, which started in Louis Trichardt shortly after daybreak. “The early morning is a bit tough,” said Mattheus, who arrived at 04:00 already to support her husband, one of the cyclists in the 30-39 age category. “It’s like the social event of the year,” Steenkamp added.

For the first stage, the riders crossed the Soutpansberg Mountain, completing 53km to Waterpoort. From the onset it was clear that there was going to be fierce competition among the elite women riders. Lynette Burger-Pieterse, who is no stranger to the Kremetart (winning it in 2009 and 2013), felt the pressure from Charlene du Preez of Team Clover Cycling, who came to defend her 2014 victory, from the word go.

Lynette, cycling in the colours of Team Active/Demacon, managed to win the first stage a mere 100th of a second before Charlene. In all four stages Lynette’s team mate, Heidi Dalton, finished third.

The elite men’s category was dominated by the black-and-green riders of Team EuropeCar. Winning the first stage for his team was Willie Smit. He was followed by JC Nel (Bonitas) in second and Morné van Niekerk (Abantu) in third.

At Waterpoort, the sun started warming up the riders and everyone was talking about the famous beef soup. About three weeks before the race, Kobie Fourie singlehandedly prepared all of the food, including the soup, which is apparently made according to a secret recipe. She would only divulge that she adds salt and pepper and lots of love because she enjoys the Kremetart every year. “It grows on you. I like to see people enjoying a warm meal, especially because it’s cold,” she said. Proceeds from the breakfast help benefit the local school.

Tandem team Jeanette Naudé (53) and Johan Beukes (67), who have known each other for 30 years, were in good spirits after completing the gruelling mountain climb of Stage 1 and headed for the beef soup line. The key to tandem success, they said, is communication. Naudé added with a smile, “The backseat driver must be quiet.” Beukes is no newbie to the Kremetart. In fact, he was a tandem winner along with partner Johan le Roux back in 1991.

Stage 2, which is considered a fast 48 km past the Salt Pans and finishes with a slow climb into Vivo, saw Charlene turning the tables on Lynette. Charlene won the stage with a second to spare.

Following the infamous headwinds of stage 3 and steep uphill finish at Schoemansdal, a lot of cyclists were asking directions for the physio massage tent to restore their legs’ cycling capabilities. This 52km stretch also saw a lot of cyclists not making the cut-off times.

Once again Charlene took top honours in this stage, finishing a second before Lynette.

Following the feared Otto’s Hoogte on the final stage, Lynette won her second stage. At the end of the day, the split seconds added up in favour of Charlene, making her the overall winner in the women’s category in a combined time of 5:05:53.56. Lynette finished in a time of 5:05:53.98 and Heidi in a time of 5:06:17.25. 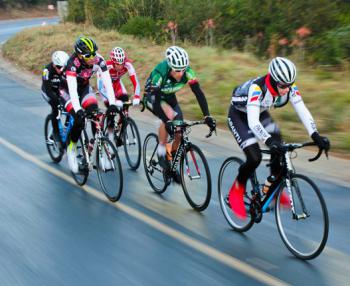 Teams in the elite men's category who battled it out included EuropeCar, Bonitas and Abantu. In the front is Morné van Niekerk, followed by Willie Smit (overall winner), Casper Kruger and JC Nel of Bonitas.

Charlene du Preez won the Kremetart for a second year in a row.

Correspondent journalists from all over the region supply us with news and sport articles.