Hundreds of learners from 10 different schools in Hlaneki outside Giyani danced and sang in jubilation after receiving sporting equipment for different sports from Lulamisa Community Development.

The usually sleepy  rural village became a hive of activity on Friday, with learners engaging in different sporting codes and Xitsonga traditional dances.

There were also dance bands that performed during the event, held at Hlaneki Primary School. It was attended by sporting administrators from the Mopani cluster, the local traditional leadership, representatives of the National Lotteries Board, parents of the learners and many community members.

A sod-turning ceremony for a new sports centre also took place in the village. Lulamisa Community Development's chairperson, Malwandla Siweya, said the event was a sort of a nationwide awareness campaign to inform the youth about the different sporting codes in preparation for the 2022 Commonwealth Games to be hosted in Durban.

"We have targeted the rural communities where some of the sporting codes are not familiar. Rural communities do not understand the different codes and we are in the process of preparing them for the games. We would like to see them take part in the games and hopefully in the remaining six years before the games we will be able to produce quality players who can stand on their feet and represent our country. Hlaneki is our starting point in Limpopo and it will be rolled out to different parts of the country."

Mr Elias Maluleke, chairperson of the local Hlaneki traditional authority, who received the equipment on behalf of the schools, could not hide his excitement. "The equipment could not have come to a better place. We are a community engulfed in poverty with many not working. The donation spells development in our community," he added. 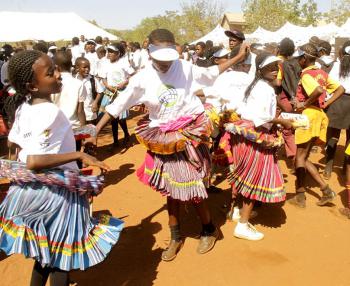 Some of the girls show that they are preparing hard for the 2022 Commonwealth Games.