Competing in the African Endurance Championships on 24 August, Lanel came up against top riders from South Africa, Namibia and other countries. Not only did she finish the gruelling 122km in a winning time of 06:34, she clinched the overall first place.

This was the 10th time Lanel competed in Walvis Bay, Namibia, but not the first time that she had won this prestigious race. As well as taking third place in her category in 2013, she won the race overall in 2014 and managed a second place in last year’s race, taking the award for the Best Conditioned horse, as well as the Best of Best award. “Walvis Bay is definitely one of my favourite races on the endurance calendar,” said the well-travelled Lanel. She has competed on Zanica, as well as on unfamiliar horses on local shores and abroad. “But Walvis Bay, although tough on both rider and horse, is beautiful. For one part of the race, you find yourself in the desert. The next moment you get to see the flamingos flying over the ocean as you gallop alongside the waters,” said Lanel.

The African Championships, which started some 20 years ago, is hosted by the Namibian Endurance Ride Association (NERA), and saw 144 riders competing over 122km. The race is divided into five stages and sets off in the dark hours of the early morning.

Riders first cover a 28km lap over the very slippery and difficult-to-navigate salt pans outside Walvis Bay. Next, they take on a gruelling 28km desert lap, which saw Lanel and Zanica trudging over Namibia’s famous Dune 7. “Crossing the dunes demands extra exertion of the horse’s muscles. As a rider, you will cross the dune on your feet next to your horse. The sand sucks you in, causing you to move one step forward and two steps backwards,” said Lanel.

The third lap covers 34km and follows the shoreline for the most part. The final two laps are covered over a semi-loop of 16km. Most riders had difficulty to convince their horses to complete the loop to the finishing line. “By then, the horses were tired and not all were willing to trudge back – anti-clockwise – over the sand back to the finishing line,” explained Lanel. “In the ten years that I’ve competed in the race, this year definitely had the most extreme weather conditions we have ever had. The temperature reached a record high of 38 degrees Celsius.”

In total, 40 riders could not complete the race because their horses were suffering from lameness or metabolic exertion, brought on by the heat and humidity.

Lanel said that she alone could not take all the credit for winning. “It was truly a team effort, made possible by my mom, dad and groom’s passion.” Mom Leonie also participated in the race, finished successfully, with dad Johan and groom Stanley making up the support team. 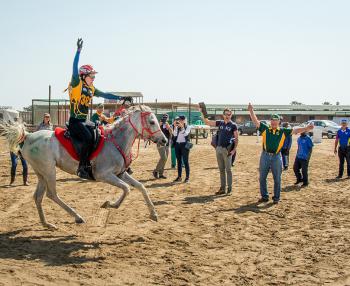 Lanel van Niewenhuizen pulls ahead on her horse Zanica, while riding along the Namibian coast. Photo published with the kind permission of photographer Lourika Reinders.