Paravolley a new sport for disabled people in Vhembe

The Eagles team from Vhembe took part in the newly adopted sport, sitting paravolley, at Njhakanjhaka new town hall a fortnight ago.

This is a newly adopted sport in South Africa and provides the opportunity for disabled people in Vuwani to show their mettle. Sitting volleyball’s rules are based on the FIVB rules for able-bodied volleyball, with a few minor modifications. It requires a smaller court (10m x 6m) and a lower net (1.5m for men, 1.05m for women) and the game is considerably faster than standing volleyball. It is played in a best-of-five sets format and the first team to reach 25 points wins the set. The game allows 12 people on the court, with six members per team.

The aim of the tournament was to educate the communities about the reality of living in a disabled body, and how to treat and love people with disabilities within their communities. The sport is mainly focused at Vhembe and established at provincial level. Some of the players in the teams will take part in it for the first time in Japan during the international games at the Olympics next year.

Hendrick Nemurura said the club was preparing for a tournament that will take place in Mozambique in December as this is the first in the Sub-African zone. “The reason for launching the tournament at Bungeni was to help us prepare for the provincial tournament that qualifies the winning club to participate at the national championships in December. We are in need of sponsors to help us take part in Japan next year at the Olympics,” said Nemurura. 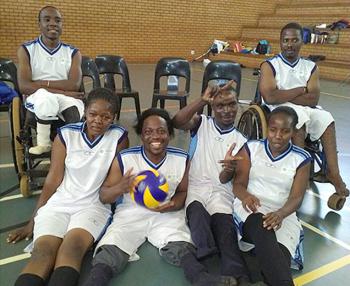 The Makhado team took part in the paravolley tournament.

Tracy Ngobeni is a 20-year-old intern who is doing her final year in journalism at Tsh­wane University of Technology. She was born and bred in Olifantshoek. She started her journalism career in 2017, after submitting her articles to the Record Noweto Newspaper in Pretoria. Her heart beats for print media because she believes that writing can heal reader's souls.