Residents of the Vhembe District have a good reason to rejoice. They will watch top-class football on their doorstep when the activities for the Premier Soccer League start in the first weekend of August.

The manager of sports and recreation in Thulamela Local Municipality, Mr Ronald Makhadi, reaffirmed that the Thohoyandou Stadium will be meeting the PSL standards when the league’s head of technical services, Prof Ronny Scholtz, comes to inspect it next Tuesday, 24 July.

When asked whether they had managed to do everything Prof Scholtz had instructed them to do in their meeting with him last month, Makhadi said that they had done some extra things, apart from what Scholtz had directed them to do.

Makhadi said that Scholtz advised them to pay special attention to the pitch. He stated that Scholtz was concerned about the fact that the pitch had been over-utilized last season. That was caused by the fact that two local teams, Black Leopards and Tshakhuma Tsha Madzivhandila, had shared the same stadium for their matches throughout the season.

Makhadi further indicated that Scholtz had also advised them to build an additional ablution block, because Black Leopards has huge support at home.

Apart from the ablution block and the pitch that seemed to be areas of concern, Scholtz also raised his dissatisfaction about the entry points to the stadium. According to Makhadi, Scholtz advised them to erect 20 turnpike gates to make access to the stadium easier during big games.

According to Makhadi, several local businesspeople, including Professional Insurance Brokers and Thavhani Mall, pledged to assist the municipality in the refurbishment process of the stadium. When Limpopo Mirror visited the stadium early this week, teams from the municipality and the Department of Public Works Roads and Infrastructure were hard at work. The ablution block was at roofing level while the pitch, turnpike gates and the parking areas were almost ready for use. 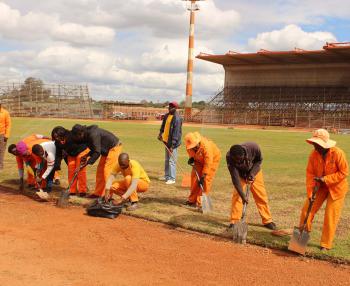 A team from the Thulamela Local Municipality doing maintenance work on the pitch.

The bricklaying team working on a small security wall.

The painting team from the Department of Public Works, Roads and Infrastructure doing the final touches at the entrance gate.

The bricklaying team from the Department of Public Works, Roads and Infrastructure is hard at work in the construction of the additional ablution block.