Black Leopards are the Limpopo champions

Black Leopards proved beyond doubt that they were ready to compete in the Absa Premiership Division by beating Tshakhuma Tsha Madzivhandila (TTM) 1-0 in the final of the Limpopo Soccer Legacy Spectacular at the Giyani Stadium on Sunday.

The former TTM midfielder, Lesedi Kapinga, scored the all-important goal towards the end of the game. He received a neat pass from Themba Ndlovu and beat the keeper, Tshepo Ramaela, with a close-range ground cutter.

Although they were without most of their regular players for last season, TTM managed to match their elder brothers in all departments from the onset to the end.

Black Leopards received a floating trophy and gold medals during a ceremony shortly after the final game.

TTM’s way to the final went via the PSL side, Baroka FC, whom they unexpectedly beat 4-2 in their semi-final. The winner was determined through a penalty shoot-out as the scoreboard was still blank at the end of the regulation time. Carlington Nyadombo, the team’s captain, Khunadi Nkoana, Austin Kwera and Patrick Meso scored for TTM, while Hlalahla Magaga’s shot hit the post and landed outside the field of play. Baroka managed to convert two of their chances through Matome Mabeba and David Zulu.

In an interview shortly after the ceremony, the coach of Black Leopards, Mr Joel “The Prophet” Masutha, said that the victory was a clear indication that they were ready to absorb the Absa Premiership division heat. 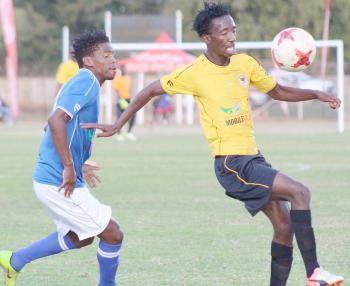 Tumelo Khutlang of Leopards pushes Mpapa Mofokeng away after winning the ball.

The captain of Black Leopards, Jean Munganga, photographed with the winners' trophy, while the players and some of the organisers are looking on.

Patrick Meso of TTM protects the ball, while Tumelo Khutlang of Leopards is on his heels.