Darkies too dangerous for Berea

Khubvi Dangerous Darkies lived up to their name when they beat Berea FC 4-3 to book a place in the final of the Mulindavhathu Soccer Challenge at the Khubvi Benjie's grounds on Saturday.

The absence of Edwin Ramphabana, Elias Ranyaoa and Pfariso Mukoma in the Berea striking force was evident from the onset. Dakalo “Drogba” Ratshitanga, Berea’s playmaker, was restless in the game. At some point he played as a defender while at the same time overlapping to assist the strikers.

Dakalo Ratshitanga of Berea missed a fortune in the 18th minute. He received a neat pass from Madzanga Tshiruma and shot wide from within the box.

Darkies became more dangerous as the game progressed, thus making the keeper of Berea, Tshifhiwa Rasivhaga, the busiest player on the field of play. Rasivhaga made his presence felt in the 28th minute. Justice Randima unleashed a powerful half volley from the edge of the box. Rasivhaga braved the shot and palmed the ball away for a corner kick.

Rasivhaga became the hero of the day when he pulled off another brilliant save towards the end of the first half. This after Mashudu Raedani tried his luck with a half volley from inside the box.

The scoreboard was still blank when the referee blew the final whistle and the winner was determined through penalty shoot-out. Darkies scored four, while Berea managed to convert three of their five chances. 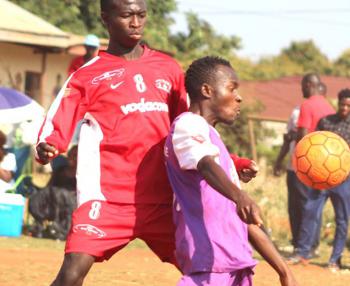 Wavhudi Mukwevho of Berea kicks the ball, while Justice Randima of Darkies is on his heels.