Several dedicated players of Mira Black Pull, including ladies’ soccer and netball, received awards for their achievements of the past season during an event at Bush Valley Gardens outside Louis Trichardt on Saturday.

According to the chairperson of the team, Mr Madambi Liswoga, they wanted to motivate the players to work hard during the season. He applauded those who received awards as the team regarded them as role models for other young people. He attributed all the accolades the team received to discipline and dedication by the players and the way the team was being managed.

The guest speaker during the event, Mr Scara Tshigomana, a referee selector and the principal at Swobani High, applauded those who received the awards. "You are the ambassadors of the team," Tshigomana said. He emphasised the importance of sport and education for the future of the youth.

He said that the youth should become involved in different sporting codes and that sport and education were the keys to the future of the youth. He requested them to stay away from crime and alcohol and to be aware of the threat of HIV/Aids.

The players who received trophies and medals in netball were Charity Kutama (most disciplined player), Vlevia Nevhulaudzi (top shooter) and Rendani Nengudza (leadership). 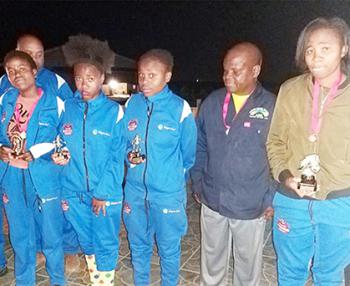