The 13th edition of the Munghana Lonene (ML) FM Xitsonga Music Awards this weekend promises much for the music fraternity and lovers of music. According to the organisers, the event has grown “bigger, better and with more bombshells than ever before.”

“The event brings numerous exciting surprises to the music community,” said ML FM's marketing manager, Ms Vongi Nkanyane. “Nominees will battle it out in 13 categories this year, including newly introduced Best Language Purity category as well as the once-off Best Station’s 50th Song of the year.”

This time around, though, the Best Mindzhumba Ya Afrika category has been dropped as a result of limited submissions in this genre. “The Dr Thomas Chauke Artist of the Year category, previously won by Joe Shirimane, is one of the highly contested categories in this year’s awards,” she said.

“With five of Xitsonga’s best artists in Kenny Bevhula, Sunglen Chavalala, Florah Nwa Chauke, Colonel Mhlongo and Percy Mfana, it will be very interesting to see who will walk away with this award.”

The station will hand out four special recognition awards at a lavish gala dinner at the Giyani Community Hall on 6 November. The selected recipient is the late Joel Bvuma, aka Xihumbuyani, who will be honoured posthumously.

Legendary MC Mabasa will receive the Living Legends Award, while Mozambican Xidimingwana (Bernardo Domingos Onuane) will receive a special award, with the great Vusi Mahlasela being honoured with The Companion of Xitsonga Music Award for his song Miyela Africa. Mahlasela follows in the footsteps of Ray Chikapa Phiri and Sipho Hotstix Mabuse, who were recognized with this award in 2013 and 2014.

ML FM's station manager, Mr James Shikwambana, said that the awards continued to play a very serious role in improving Xitsonga music. “The awards have inspired our musicians to up their game in producing good-quality music,” he said. “As a station, we are also using these awards to send a very strong message in our fight against xenophobia, hence Xidimingwana from Mozambique is nominated to receive a special award.” 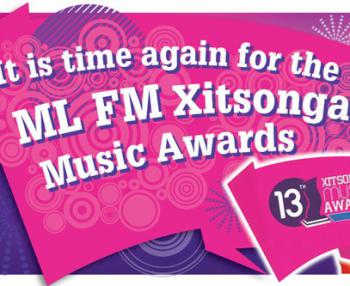 Veteran musician Joe Shirimane was the first artist to win the prestigious Dr Thomas Chauke Artist of the Year award.