The message of the album outlines how people who have jobs can still fail to fulfil their dreams. The album contains 13 songs with Titharhi ta mali yo lomba, Ganga raka hina, and Xifula xa Vusiwana some of the most popular songs on the album.

He released his first album, Vunghwendha, in 2008. The songs on the album is about a man who is afraid of women and ends up raping animals. He released another five albums called, Bakanya Njhovo, Vana va Sesi, Rifu ra Mhani, Tiyisela Vanuna, Mhalamhala, Tshengwe ra Xihundla.

Makamu said he always wanted to work with one of the legends of Xitsonga music, "the late Matshwa Bemuda, but he left before I could approach him to help me. I love how both Dr Thomas Chauke and Matshwa Bemuda convey their messages through music".

He added that he was grateful to the people who had helped to nurture his talent. "It's not easy when you are new to the industry, but patience is the best weapon to help you reach your goals. I would like to thank the people who made my talent their priority and supported me and spread my gift to the public," said Makamu. 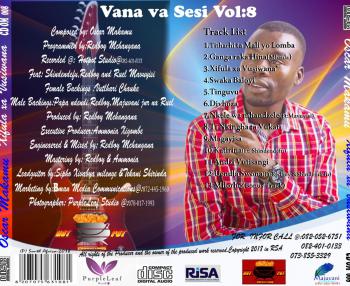 Tracy Ngobeni is a 20-year-old intern who is doing her final year in journalism at Tsh­wane University of Technology. She was born and bred in Olifantshoek. She started her journalism career in 2017, after submitting her articles to the Record Noweto Newspaper in Pretoria. Her heart beats for print media because she believes that writing can heal reader's souls.