Muvenda poetess in an incredible dimension

When the world speaks of performance poetry at its best in terms of form and authentic quality, it will always mention the name Muvenda Poetess, who was born Takalani Lishivha at Dzanani Migavhini in the Nzhelele area.

This resident of Muduluni village in the Kutama area had read widely in preparation of writing original, sensible poems of her own and then presenting them to world in the form of performance.

Just some months ago, she brought fresh tears and consolation to hundreds of mourners during the funeral service of Face of VenRap Humbulani Humblo Mananzhe, when she performed a poem specifically penned for the young departed artist.

“I let my poetry speak to the people,” she said. “I choose not to interfere with the voice of the poet inside me. Poetry is a feeling hidden deep inside that needs someone to uncover it; it is a chain of both hurts and happiness.”

She had discovered poetry while she was in Grade 4. She was discouraged from fully following her passion for poetry because she grew up knowing that a poor child from a mud house was absolutely good at nothing. “Sometimes people can discourage you for the mere fact of your unfavourable background,” she said. “In my case, even though I had to ignore following my passion in poetry, poetry never walked away from me.”

She started writing poems for friends to read. Her uncle, the late Mulalo Cyril Mabala, was her biggest fan. “I could write and he read and insisted I practise for him. Around 2010, I started my journey of reciting at church conferences. From that point, people and church mates started calling me muthukhapfe,” she said.

She mentioned Lebo Mashile and Mzwakhe Mbuli as her favourites poets. “I understand the pain they set in a picture,” she said. “I feel the joy they feel on the stage, and what I love more about them is that they are poets and I'm one of them.”

Muvenda Poetess was awarded the Best Poet Award by the Future is Ours Together. She possesses a rich vocabulary as a Muvenda poet and, if the debate or selection continues as to who should be President Matamela Cyril Ramaphosa's official poet, she is one poet whose poetic merits qualify her for that honour and position. 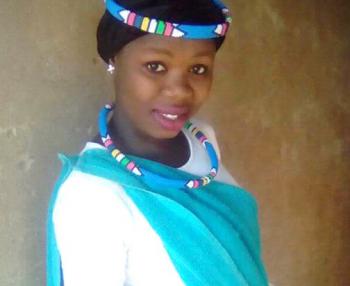