About four years ago, BlackJahman announced that he had reached a stage where he wanted to play live music for all his fans and the people of the world.

Last year marked the advent of his live performances. He performs under the name BlackJahman and The Receptors Band, which is also an amazing team of highly talented instrumentalists who all possess a keen ear.

To say that BlackJahman and The Receptors Band are a “live band” is an understatement – they are a “Movement”. In musical terms, a Movement contextually refers to a larger band whose instrumental sounds are harmonised in a flawless unity.

“We are writing history,” BlackJahman said shortly after a recent performance at Elim. “With 13 albums behind my name, I am even going much stronger. I have elevated myself from strong semi-live performances cherished by masses all over the country, to a strong, full-live-band performance the region has never seen before.”

BlackJahman described the transition into the full-live-band performances as a great one. After only a few weeks of rehearsing with The Receptors Band their movement transitioned into a full-fire reggae explosion. The combination of live instruments, his unique signature chants, the beating of his peace drum and live singing turn every concert into real entertainment that educates, which he calls ‘edutainment’.

“My music carries teachings, healing, entertainment, guidance and courage,” he said. “I am mandated to preach messages of peace, so I move from town to town commanding peace through my music.”

His 12th album, Peace Teacher, won the best reggae album award during the South African Traditional Music Awards in 2017. He is very determined to challenge the Grammy Awards soon, so that he be awarded one based on musical merit.

He does not seem to worry much about inadequate airplay by radio stations. He believes that it will take time for some radio stations and TV channels to accept reggae music as a valid genre that also deserves airplay.

He said he had been condemning piracy all along since it was destroying profits in the music industry. He pointed an accusatory finger to the government. “If the government cannot deal with crimes such as theft, heists and corruption, who can expect them to do something about piracy?” he said. “I can only teach my fans and friends that it is wrong to copy music when you should actually buy it. Music will cease to exist. If music ceases to exist, all of us will dance to the sound of gunshots in the streets day and night.”

BlackJahman’s real name is Witness Fakazi Ntshangase and he was born in KwaNongoma in the KwaZulu-Natal province. He grew up in Mpumalanga and currently lives in Limpopo.

He is available on Facebook as BlackJahman Ntshangase or BlackJahman Music & Peace Teachings. 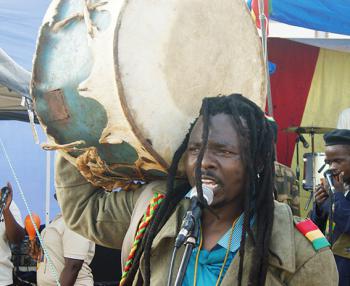