Pastor Petrus Mamuhohi, who only released his debut book, You Are Wired for Success, a month ago, already has a new book in the making.

The book, called Pastor Sam, a Servant Leader – My Journey of 20 years with him, pays tribute to his late friend, Pastor Sam van Niekerk from the Agapé Centre in Louis Trichardt, who had not only impacted on his own life but also that of many other Christians leaders in the Vhembe District and beyond.

“Just six years into the new dawn of democracy in South Africa, when the country was still gripped by the dark cloud of uncertainty, I met a selfless, Kingdom-minded man, Pastor Sam van Niekerk,” Mamuhohi recalled. “I had only been in full-time ministry for two years and nine months then. I suddenly realised that this man had overcome the evil spirit of racial division; that skin colour mattered not for the truly transformed Christian believer.”

He felt compelled to share the spiritual journey he undertook with Pastor Sam. “I don’t really know what it will mean to the readers,” he said. “But my takeaways from the book are the importance of loyalty in a relationship, and how much unity of hearts can achieve for the Kingdom of God. Greatness is making others great by serving them with what one has been entrusted with, and that’s exactly what Pastor Sam did during his lifetime with us.”

Mamuhohi explained that a revelation was received during prayer at Agapé Christian Centre, Louis Trichardt, in 2000, where the church was made aware of the coming revival that would affect the whole region. “Not knowing any black pastor from the rural area at the time, they prayed for God to send them one,” he said. “I am the second one who connected with Pastor Sam after Dr Mike Maimele from Chavani village.”

Kingdom Impact Team (K.I.T) was born and the revival of the Word and the Spirit began. Many pastors and church leaders from around Limpopo Province flocked to Agapé Christian Centre once per month for tremendous spiritual impact with Pastor Sam.

“This monthly meeting still continues strong today,” he said. “Then, Pastor Sam generously gave the best he had been given by God through teaching and training. He also exposed us to global influential leaders like Dr Jonathan David and Dr William Vun. Opportunities were made available for church leaders to attend conferences in Malaysia.”

Mamuhohi said that he had personally been thoroughly equipped to serve God’s Kingdom in a way he had never imagined through his relationship with Pastor Sam. He said that Pastor Sam’s godly legacy would remain with many of those who directly benefited from his life and ministry, and he believed that the book would be instrumental in influencing loyal relationships in God’s church and other spheres of leadership for great exploits.

Pastor Sam, a Servant Leader – My Journey of 20 years with him will be available as of 4 October from Mbuye Christian bookshop in Thohoyandou, Destiny Enterprise for Printing and Training at Mandiwana village in Nzhelele, and the Agapé Christian Centre in Louis Trichardt. For more information call 083 656 3892 or 060 664 1317. 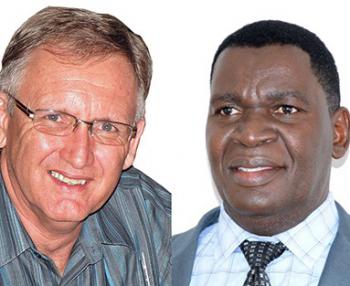