The legendary Adziambei Band has been nominated as best Tshivenda Artist/Group for the 2021 South African Traditional Music Awards (SATMA) with their latest album, Tshipala Mulilo Volume 16.

Founder of the band Maele Elias Sirwali said that this was a huge honour for them as the band had been in the music industry for more than three decades now. “We feel excited and encouraged by the love and acknowledgement we get for our passion in the music industry. With the support from our fans, mostly music lovers of our legendary songs, we hope and are confident that we will emerge as one of the winners of the awards,” said Sirwali.

The band has since released a total of 16 albums. During the funeral of the late Raedani, who was singer and composer of the band, in March 2013, the band promised their fans that they would not dissolve, and in December 2013 they released Mu tula gole. They are known for producing music with educational and informative messages, uplifting the Vhavenda culture and tradition, while also addressing certain challenges that the country is faced with, such as domestic violence, unemployment, and drug and alcohol abuse.

Adziambei Band was winner of the Tshivenda Music Awards (TSHIMA) in 2012 with the song Nwana o ngala ngala.

Sirwali is now calling upon the entire public to cast their votes to ensure that they scoop up this award, for which the ceremony is to be held from 27 to 28 November in Mbombela, Mpumalanga, in partnership with the Mpumalanga Department of Art, Culture, Sport and Recreation. 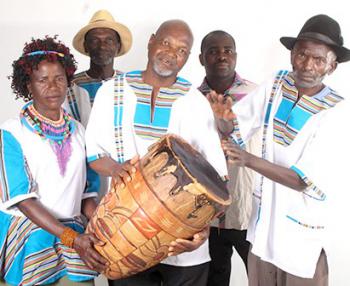 Members of the legendary Tshivenda group, Adziambei Band. In the front, from left to right, are Ms Martha Negogogo, Mr Samuel Mabuda and Mr Johannes Kwinda. In the back are Mr Maele Elias Sirwali (wearing a hat) and Mr Owen Sirwali. Photo supplied.